My late 2009 27inch iMac froze with funny pink ‘squares’ (see first photo) popping up all over the screen . I hit the power button, for a restart and all was fine for an hour or so when the same thing happened. This time I unplugged the iMac from the power and waited 10 mins or so. Upon start up the startup screen had 5 or so pink vertical lines running from top to bottom (see photo 2) and the system promptly froze with a plain white screen.

I have reset the SMC and PRAM but still get the pink lines upon start up. After a few power offs and restarts usually things start working again. I wondered if anyone had any idea as to what this problem might be?

7 years use out of a computer used most days, albeit not all that intensively, is not bad, but I’d hate to throw this out if it is only a small problem. Thanks in advance for any advice/comments 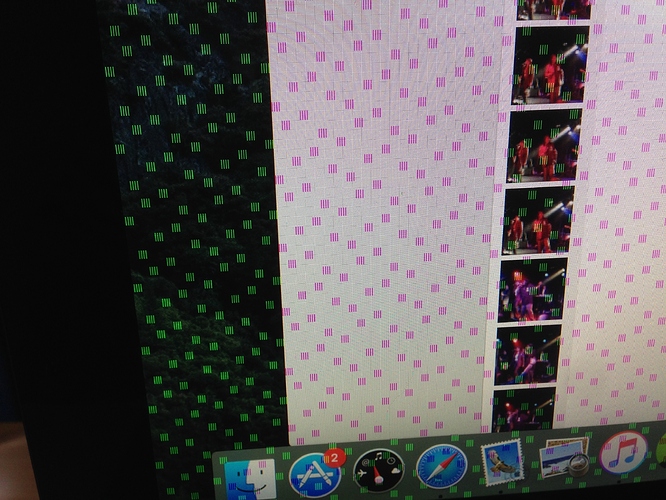 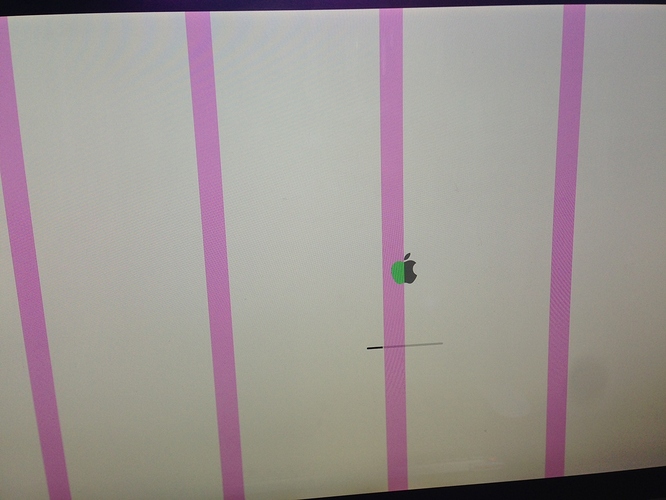 Seems to be a known issue for iMacs of that era on Google search. Hardware issue?

Has anyone seen this before? [IMG] Pink square dots randomly start appearing and flashing on the screen. Have restarted and reset the PRAM....

Yep, mine did the same last week. Still trying to work out what to do about it as the 2009 model is no longer supported but the video card from the 2010/11 models should work in there. Wonder if an authorised service place would replace it for me or supply a card so I could do it myself…

Most places won’t give you the card. They will install it. They also won’t get you a newer card. If they can get it, they’ll do a like for like replacement.
Hit up eBay or google and search for parts yourself.

Hit up eBay or google and search for parts yourself.

Been looking but they appear to be hideously expensive for original Apple parts and I haven’t found any confirmation online that any other Radeon cards of the same form factor (MXM) will work. Might have to take a gamble on it.

Going to try baking the existing card first though. Apparently 200 deg C for 10 minutes is enough to reflow the solder and get things moving again. Nothing to lose as the machine is cactus at the moment. Just waiting for our new kitchen to be installed so I have an oven to try it in.

Ok, I’ve done some more digging and it appears that MXM cards that are EFI compatible will work. Or some of them will anyway according to this thread http://forums.macrumors.com/threads/2011-imac-graphics-card-upgrade.1596614/ as long as MacOS has drivers. Still not many cheap options though.

Will report back once I have a chance to bake the card.

Thanks for your comments guys. I’m not as brave as mycle and from what I’m seeing it may not be a cheap fix to get done officially. It seems (at this stage) to start up OK if I hold down the ‘D’ key on restart - this is supposed to fire up the hardware test but doesn’t … I may wander along to the apple store and see what the Geniuses have to say. I might be in the market for a new iMac - there’s always an upside if you look hard enough!

The response from my local authorised repairer was “Unfortunately Apple have recently declared the 2009 iMac a ‘Vintage’ model and as such we can no longer source parts to perform repairs.”

So there’s not really an official path you can go with this one. They also said they couldn’t order a part for a 2010 or 2011 model which would do the job as they have to submit the serial # of the machine to Apple when ordering the part.

Getting 6 years’ worth of use out of an iMac is pretty good going actually.

This iFixit guide shows that you can replace the 4850 with an iMac 6790.
I can’t find any 4850’s for sale at a reasonable cost, so this might be another avenue you could pursue. 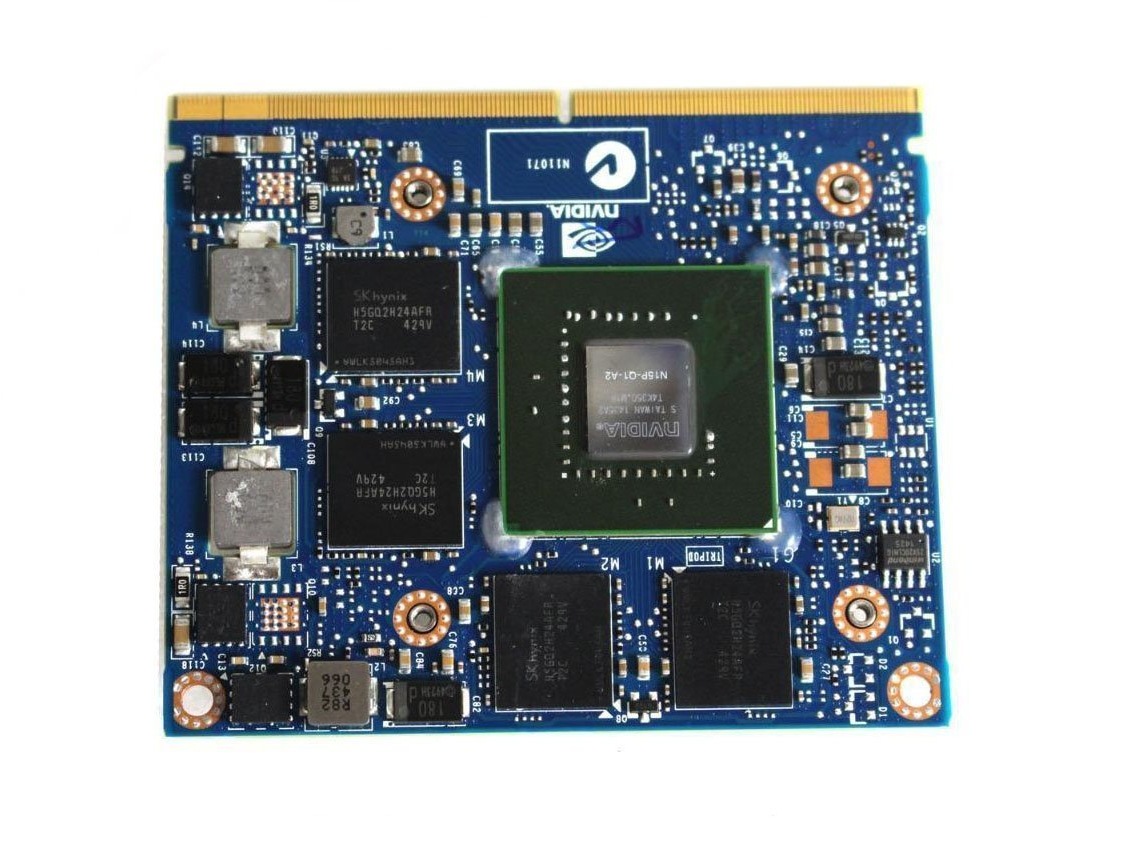 Upgrade the Radeon 4 series video card in your iMac with the latest Radeon 6 series card from the 2011 iMac model.

Yeah, it all comes down to what is a reasonable cost to keep it running. And how many of the 6790s on ebay can be trusted to be “working”.

Sending this from my resurrected 2009 27" iMac. Baked the video card in the oven at 200C for 10 minutes and put it all together again with some fresh thermal paste and it’s running well so far. We’ll see how long it lasts.

Well done. I caved and bought a new one, delivered yesterday. So far the setup is running smoothly. Backing up from time machine was very smooth. Just a few passwords need to be entered here and there.

Hi @mycle (& “the internet”) I know its been a gooood while since you cooked/baked your GPU in the oven @ 200ºC but I’m curious to ask, how long it lasted till you had reoccurrence?

I’ve got my iMac to the point where ANY major video (screen movement/genie effect) changes seem to lock the entire Video card… I can, however still access and stream Plex data off it as a server… even though the screen is completely paused and unresponsive.

I’m capable of removing and cooking it… I’m also able to replace it without too much of a hassle. Just want to see what is the easiest/cheapest path for now…

Technology is wonderful. When it works. 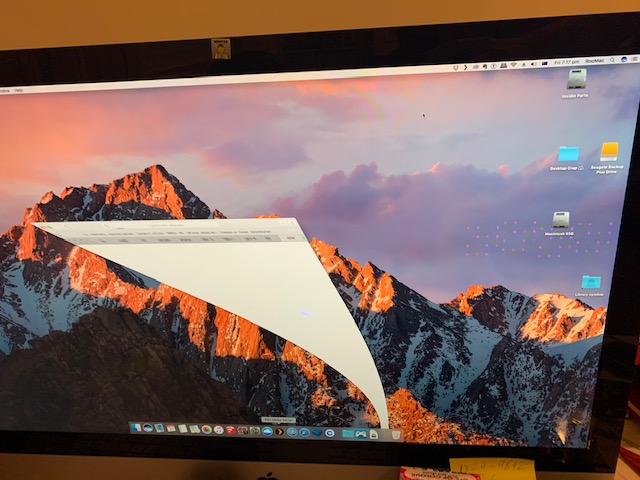 You could alway give it a go. I baked the GPU from my 2011 iMac 27 about three times before it would not revive anymore. Although I might of got a bit carried away with the heat paste TBH. I got about six to twelve months out of each go. I might have talked about how I did here somewheres.

At worst your very old and well used computer is dead and you would be forced, forced to buy a new one. I suspect the last intel iMac might get released very soon.

Yes maybe a new thread might have been the go.

But its for the same machine… 1 year older than the original posts’ machine… so I replied.

I did the bake-in-the-oven thing… mentioned above in this thread, it worked …a TREAT! Mac is humming along nicely… all’s I did was follow the instructions + vacuum it (carefully) and voila!

I did… and it worked perfectly!