Picked up this positively beautiful example of the MacBook 6,1 for a very decent price. I’m going to put Mojave on it and toss in an SSD and 16GBs of RAM. But even with a spinner and 4GBs it is incredibly snappy. Very hard to imagine this only has a Core2Duo in it. The screen isn’t retina, but it is bright and clean and significantly better than the 2008. A truly excellent machine. My quest to save the polycarbonates continues! 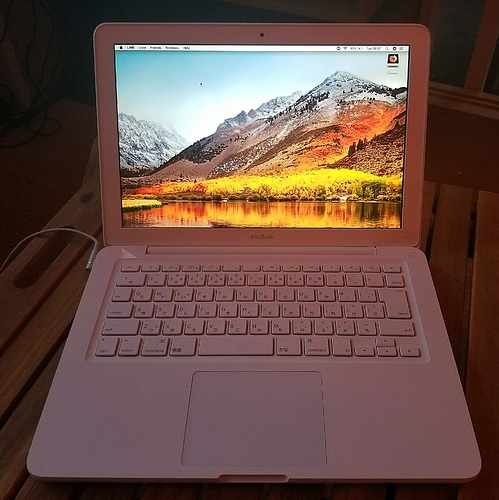 I agree, a beautiful machine.
Not compatible with Mojave as far as I know. Maybe you have a way to do otherwise.
And ram max is 8GB, again assuming this is a late 2009.

Bought mine maybe 2 years ago, put a SSD in it and ram still at 4GB, it’s surprisingly snappy. Great screen as you say.
Battery count was under 500 cycles and these are 1000 cycle batteries.

This machine a delight to use. For a 10 year old laptop these are a real bargain.
Running High Sierra on mine.

What did you pay for this ?

Yes, this is a 2009. I already got Mojave installed and running pretty okay. A bit sluggish compared to my 2015 MBP i7/16GB, but it’s probably due to the spinner drive and 4GBs of RAM more than the spec difference.

And darn, you’re right, the max is 8GBs. I assumed it was 16, because I’m used to 16GB in the unibody form factor, which this is, even though it’s polycarbonate.

Battery is still 86% capacity and well under 1000 cycles according to Coconut Battery.

I paid AU$264 for it (well, actually 20,000 Japanese Yen), which is about what this machine goes for here in Japan. I’ve talked a lot about this, but Macs in Japan hold their value even better than in Australia or the States. It’s why I had @jaysee sell me my 2015 MBP from Australia. Even with shipping and taxes, it was cheaper than buying it here! 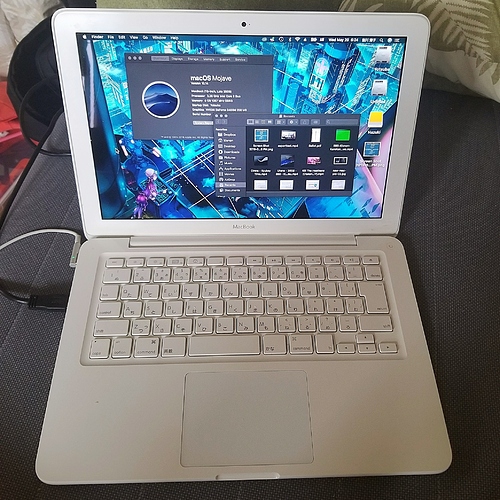 Paid $270 for mine about 2 years ago so yes prices there higher. Was probably somewhat of a bargain when I bought it.
Great buy for you though, these are excellent even at 10 years old.

How did you get Mojave installed ?
Be interested to hear about this after SSD installed and ram updated.

I decided to leave the 4GB of ram because it’s one of my play machines. Not to say I haven’t considered it and may still do.
Mine still really in great condition, as it seems yours is.

Cosmetic problem I’ve seen with these white poly unibody’s is the rubberised back can delaminate. Mine is a little dirty but I think structurally sound.

This has a bit of surface dirt that I’ll clean off when I get to the office this morning, but otherwise looks like it has barely been used. But that’s actually not surprising. One of the reasons that Macs do hold their value so well in Japan is precisely because people really take care of their stuff here and everything is really nice.

Not sure if I have the RAM in my Box o’ Parts at the office, but I have a Samsung Evo 860 SSD I can put in today and test.

Thanks
Had read quite a lot about this patcher when it was clear the mini 2011 was not compatible with Mojave.
Revisited the dosdude1 page but think I’ll stay on High Sierra on both the mini and the Macbook unibody.
While I suspect there are minimal risks with someone who regularly uses this patcher, there are with someone who doesn’t. HS does the job for me.
And in the case of the mini the 2018 model is tempting.

So far I haven’t had any issues with the patcher, but is is true that at this point, I have used it on multiple machines. I’ve got 10.14.4 installed now, but I need to go up to 10.14.5. I swapped out the RAM and the SSD, and the improvement on boot times and certain animations was much improved, but it is still clearly a bit sluggish compared to my 2015 i7 MBP and my Mac Pro 3,1. But absolutely shockingly well for a 10 year old machine with a Core 2 Duo.

I’m curious if there would be any further improvement if I went ahead and pulled out the SuperDrive and put in another SSD in a RAID configuration. 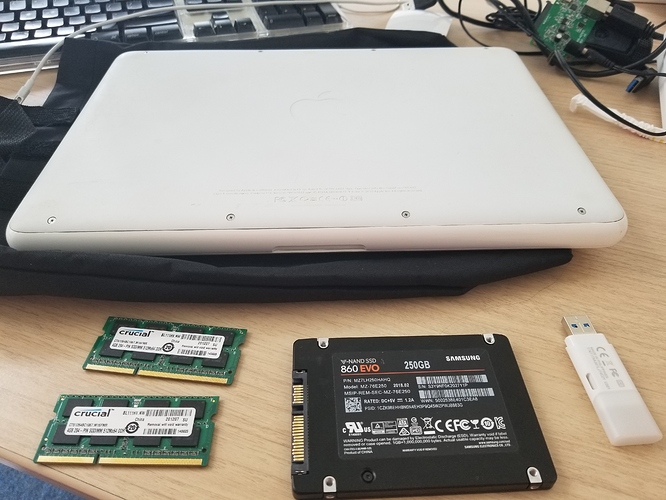 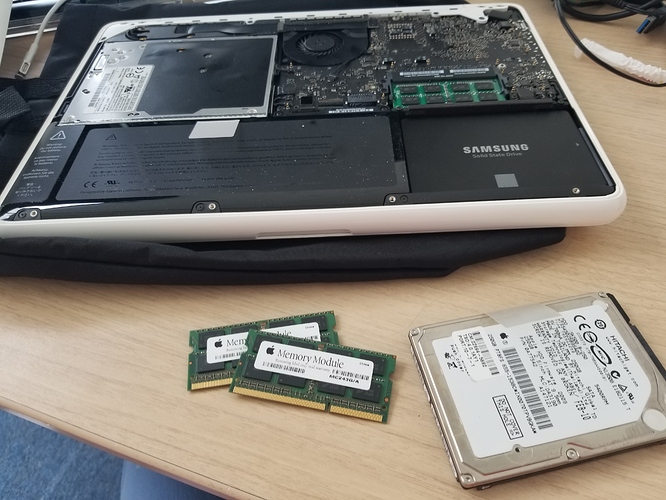 Might be a little sluggish while spotlight does it’s thing on a new install.
My machine, that it boots to login screen in under 30 sec, and that I can start working after a minute or so, this is a very responsive computer. Apps launch quickly and pages load with only a momentary pause,
I like also it’s such a clean looking machine, has a great keyboard and screen is clear and bright.

Did you clean your back cover with anything in particular ? Does look a lot cleaner than mine.

Not exactly ‘new’ but definitely stoked about it. Got myself a drink vending machine. Coin operated. Shows once a drink is ‘sold out’ using infrared sensors, the front display you can open up and put in empty cans representing what’s available. really cool (pun intended) way to have a drink 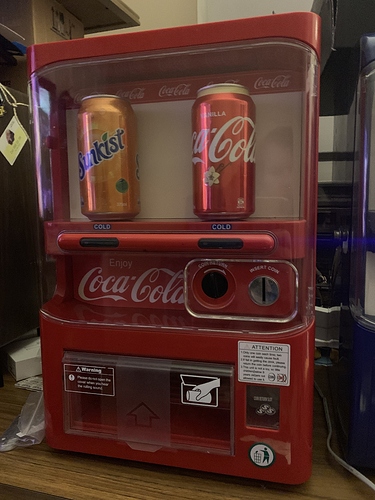 It seems to be getting faster with time, so maybe you are right.

I cleaned the back cover with the cleaning stuff we have in the office, which is made for wiping down computer equipment.

Oh, hi there Apple, I see what you did there in iCloud, I see that Mojave dune on my MacBook White. Well done. Tacit approval?

How reliable is the dosdude1 patcher?

How reliable is the dosdude1 patcher?

Extremely reliable The ONLY oddity with the MBW 6,1 is that in light mode, there’s a weird graying out of the translucence, but since one of the main reasons to go up to Mojave is night mode (which I use no matter the time of day), this isn’t a concern. On the Mac Pro 3,1, the only issue was the inability to use anything but basically the NVIDIA GT 710 or the GTX 680. AMD cards are no go and there are no Mojave NVIDIA Web drivers for other cards. On some models, some specific Wifi cards do not work, but this is totally luck of the draw, as two otherwise identical models of various patchable Macs may contain different wifi cards. It’s essentially hackintoshing real Macs, so there’s always something that might not work correctly, the question is: does whatever is not working apply to your workflow?

Needed to extend wifi to studio in backyard. Works a treat, but had to plug into optus supplied router due to phone and nbn, shame as that means one more thing in the cupboard. 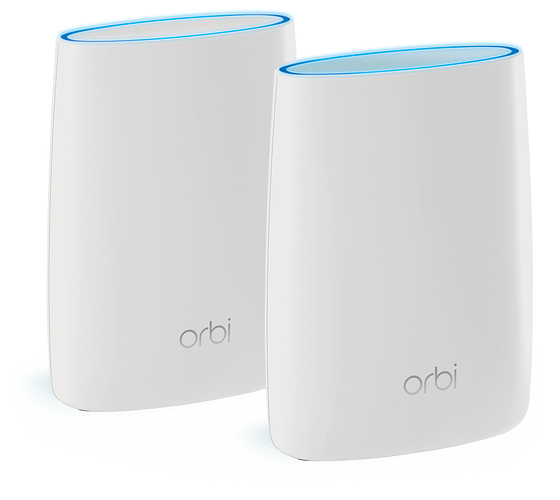 also happened upon some decent deals at JBHifi two days later, got a plugbug duo @ $37, 2m TB2 cable and the first release fabric sport loop pride band for a steal.

I forgot about this thread! I bought myself a GoPro Hero 8 with a super suit to go on my motorbike helmet from JB Hifi because they were under $500 (plus the super suit).

Me too. I’m a glutton for buying discontinued camera gear, so an opportunity for getting a Nikon1 J5 refurb came up and I took it (I had wanted a J5 for a long time but wasnt prepared to pay full price). And now that I have it, I think I prefer the older Aptina sensor to the newer Sony one. Oh well, it will come in handy and its so tiny!!

Got myself a drink vending machine.

Love the vending machine. Every now and then I look into one of these. partly to help slow the kids down a little and partly because I think it would be very cool!

They’re so hard to find but so very awesome

Out of date. I thought I was commenting on Kyte’s new kitty.

I thought I was commenting on Kyte’s new kitty.

LOL! Yep, He’s been with me for nearly 4 years now