Logically, I know the answer… But logic and me - well - it’s complicated.

That said… for some time I’ve been considering my options for what comes next. As I see it, I have two paths, and both involve keeping my 23" ACDs:

Last year, when pricing a 12-core machine, I was looking at around $2k. I’m wondering now if the transition to Apple’s M series chips is going to see a glut of 12 core Pro’s on the market. If I can pick one up cheap, then price wise, it’ll be better to go with the old… rather than the new.

I’ve flip flopped on the idea over the past year… but more and more am leaning toward the 5,1, especially given my reticent feelings toward supporting Apple’s non-upgradeable machines.

There’s a YouTuber who repairs Macs/iPhones etc - he has posted several videos of his 5,1 that he’s maxed out, and on paper it certainly competes with the much more modern machines. I haven’t priced his particular setup, but - shows that it’s feasible in terms of achieving something comparable… 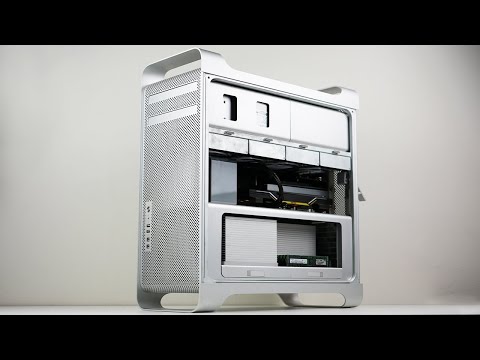 Are y’all embracing the M-line, or staying in obsolescence?

I only retired my 2008 Mac Pro (3,1) last year. I had upgraded it a lot and was quite fond of it, but I don’t think I’ll ever need a pro Mac again. I don’t miss the insane power consumption either. It used more power asleep (35W) than my Mac Mini when it’s hard at work.

I would think carefully about whether an M1 Mini is going to be able to drive your displays ok and what might happen when you have to replace them. I had to buy an eGPU when I upgraded my monitors to 27" 4K because the new Mini basically couldn’t run Lightroom anymore. You wouldn’t have that option with an M1 Mini because they don’t talk to eGPUs and you’re probably going to want hi res screens at some point.

I have no data to base this on, but my hunch is that the M1 Macs are going to get old really fast. A bit like the pre-SSD MacBook Airs. Groundbreaking and amazing at launch, but quickly overtaken by something much better.

If you’re not buying new and you like to hang onto your machines for a while, I think I’d probably look for a high spec Intel Mini, like the 3.2GHz 6 core i7 with a wicked fast SSD I’m writing this on.

Power consumption is certainly something I should be paying more attention to! I’d like to think I am environmentally aware, and sitting here in front of the Mac Pro, listening to its whirring fans… has probably become too ubiquitous…

(Whilst my wife and I are on the best incomes of our lives, we’re saving to commit to a $650k+ homeloan, which is fucking scary! so being frugal is still very much the mindset…)

I’ve just purchased a 2012 i5 Mini to replace the MacBookPro5,5 we’ve been using in our bedroom as a Netflix/Plex box. So, am getting familiar with Intel Minis. It feels slow as hell compared to the MacPro and MacBookAir that I use daily - but as the MacRumors guys have pointed out - they are both using SSDs, but the Mini has a 5400 spinner… When I set up my dad’s new M1 iMac in a few weeks, I’m going to salvage the SSD out of his dying iMac, and am hoping it will fit in the Mini to speed it up.

So, rather hilariously, I’m back on a Mac Pro 5,1 as my primary workstation these days. Until recently, I was running a 2018 Mac mini with an eGPU attached as I needed to drive 3 displays. Before that (start of this year) I had an M1 mini before that which I ended up selling here because it could only drive 2 displays and had no eGPU support.

This little project, the OpenCore Legacy Patcher - has been a revelation.

I now have a boot screen for OS selection (Mac or Windows) plus I can run Big Sur with FileVault (the main reason I left the Mac Pro after High Sierra was that there was no official FileVault even with a GTX680 that had boot screen support).

Not sure I’d recommend anyone non-techy do the same. This is a great machine, but the future isn’t guaranteed. Monterey should work, from what I’m hearing, but it could break at some point. I’m happy to run this machine on Big Sur until there’s either a) a new Mac Pro desktop or I can pickup a 2019 Mac Pro second hand for a reasonable price ($10k+ is crazy!).

The biggest thing I love about being back is that my desk is now clear, and under my desk all the tech lives in one box. I previously had a Mac mini, an eGPU, a 4bay thunderbolt SATA enclosure, USB drives, dongles, the works. Now everything is in one sleek tower. The way it should be.

If I do stay with the 5,1… I’m not going to be flashing any graphics cards. I’d just get the best native option. The guy on YouTube in the above vid said he sourced a card from a modern iMac, thus it “just worked”. Not sure which OS he installed, but gathered it was very recent - the video was made late 2020.

If I go Mini… I’ve got 2 main data drives, and 2 back ups, as well as needing a scratch disk (and backup). Have always understood you don’t use your system disk for a scratch, so - would need a fast external as scratch…

A 12-Core just sold in eBay for about $800. It had enough RAM, but only the stock graphics card, no SSD. So - it was still probably $500 off being the perfect system for me.

I’m not running a flashed GPU. I’m running a standard PC RX580. OpenCore boots off a USB stick then displays the bootloader.

BTW, don’t get me wrong, the M1 Macs are faster. But they don’t feel faster to me with what I do (especially thanks to the RX580), and the extra RAM / fast cheap SSD is more useful for me.

P.P.S. Only the M1 Max chips have a GPU faster than my RX580, which is a 4 year old graphics card. I think we’re going to have to wait for a new Apple Silicon Mac Pro before we see better performance than the current 2019 Mac Pro in GPU at least.

In all honesty, given I don’t see myself ever making money as a video editor, I probably don’t need the absolute best of the best 5,1 - but the thought was to have as good as I could get, so that it’s “less obsolete”…

I’m sort of in the same boat here. I am currently using my 5,1 Mac Pro that I purchased new back in the day. This is a 6 core 3.33 GHz machine with 32GB RAM. I currently have Mojave running on a Samsung NVME drive with 4 2TB HD’s in a RAID 0. I have an AMD RX570 in it at the moment but I do have a 580 I can install. Pretty much the only app I’m using these days that will tax a machine is Photoshop which doesn’t overly rely on a GPU.

I am having a couple of problems with this setup. All of a sudden my photo printer keeps coming up with a communication error and there seems to be some sort of permissions problem with the NVME. For example, some updates which require me to enter an administrator password won’t work!

I’ve looked at Open Core but I’m a bit unsure how I can update my system without wiping the NVME and starting again. As far as I can see, you need a boot screen, which I don’t have with the GPU. And not sure if this will solve the problems I’m having anyway.

I’m seriously considering a Mac mini as I just don’t know if I can be bothered mucking around with the Mac Pro anymore. Having said that, back in the day, I was running OSX on a PM9600 with a Sonnet G4 800 processor card in it so I’m capable of doing stuff like this…

I’m still debating what I’ll do… Final Cut is as intensive as I get, but I haven’t even done anything in FC for probably 2 years now, and it’s just for fun… I’m sure a Mac Mini could handle it just fine.

Those PM9600s were a beasty. Never liked the out-rigger design myself… but they were easier to access than the Quadra 840av design.

No answers RE your NVME / AMD issues I’m afraid, but hopefully someone here may have something for you.

So, I bought a Mac mini on eBay, 521GB drive, 16GB RAM, for just over $1200 including post. Will sell off my Mac Pro bits (except for the NVMe) which will more than pay for this. I will buy a Thunderbolt enclosure for the NVMe and use it for Photoshop scratch.

Thanks for the update, @richard

I am going to upgrade my 2012 Mac Mini with SSD and more RAM, and will then see how it performs as a Plex server. If it does the job, then I’ll be more inclined to try out using a Mac Mini (2018?) as my new main machine… I may even go for an M1 - I don’t foresee me upgrading beyond the 23" Cinema Displays any time soon, so it should be able to cope short term. And if something happens and I do need to upgrade them - the second hand market wont crash any time soon…

I’ve been using a Mid 2011 i5 Mini as a Plex server for nearly 10 years. It’s more than adequate if you’re able to direct play, it’s starting to get a bit stretched when transcoding 1080p video though.

Thanks for that, Taco.

I have a mixture of media, but certainly have some full HD content… and also an i5 Mini (though it’s the 2012).

I’ve been using a Mid 2011 i5 Mini as a Plex server for nearly 10 years. It’s more than adequate if you’re able to direct play, it’s starting to get a bit stretched when transcoding 1080p video though.

I have a similar experience. Purchased my 2011 i5 Mac mini (pre-loved) when my ~2013+ (i7?) died during a software update a few years back. I have a 4TB drive in my Newertech/OWC(?) ministack for media storage and SSD in the mini.

Runs pretty solidly except for larger 1080p files. Starting to notice the occasional hick-up, which may also be my ageing AppleTV, and/both the HDD in the ministack…

Should get the M1 mini by the end of the week.

Got my new (second hand) M1 Mac mini yesterday but I’m having a few problems with it.

Anyway, I’ll start a new topic for that to see if any of you knowledgeable people can help me out…