So Apple has now made the display everyone was asking for, so that’s a good thing. But $2,499? It’s essentially the cost of the outgoing (base model) 27” iMac.

This is like the previous 27” thunderbolt display but with modern updates, which is nice. Sad that they didn’t include thunderbolt passthrough (is that even possible?) or ethernet (even on the power brick), no USB A and only three USB C ports (once you plug in your actual computer).

I suppose that your new Mac Studio or MacBook/Air/Pro likely uses a wireless keyboard and mouse and in checking it doesn’t appear Apple even sell a wired option anymore which I suppose helps support their low port products. I still think it’s a shame that all the ports are on the back, although like that the Mac Studio has some on the front now and your laptop is likely more accessible that the rear of your display for things you want to be plugging in and out.

The lack of USB A is a little painful, but if it’s easy enough (if expensive) to replace all your cables with USB C variants to solve the problem.

There also doesn’t appear there is going to be a replacement 27” iMac and while the base model Mac Studio + Studio Display combo is probably considered closer to the old iMac Pro ($7k+) it starts at $5,598 so there isn’t a cheap option for a 27” iMac anymore. Will they release a new option to fill this gap, or is it 24” or nothing for the cheap seats.

Lots of people are going to be happy there is an Apple option now, even if it’s priced so high. But for more money than the M1 MacBook Pro my Wife has I just don’t know that I could justify this over a nice 27” 4K and docking station. 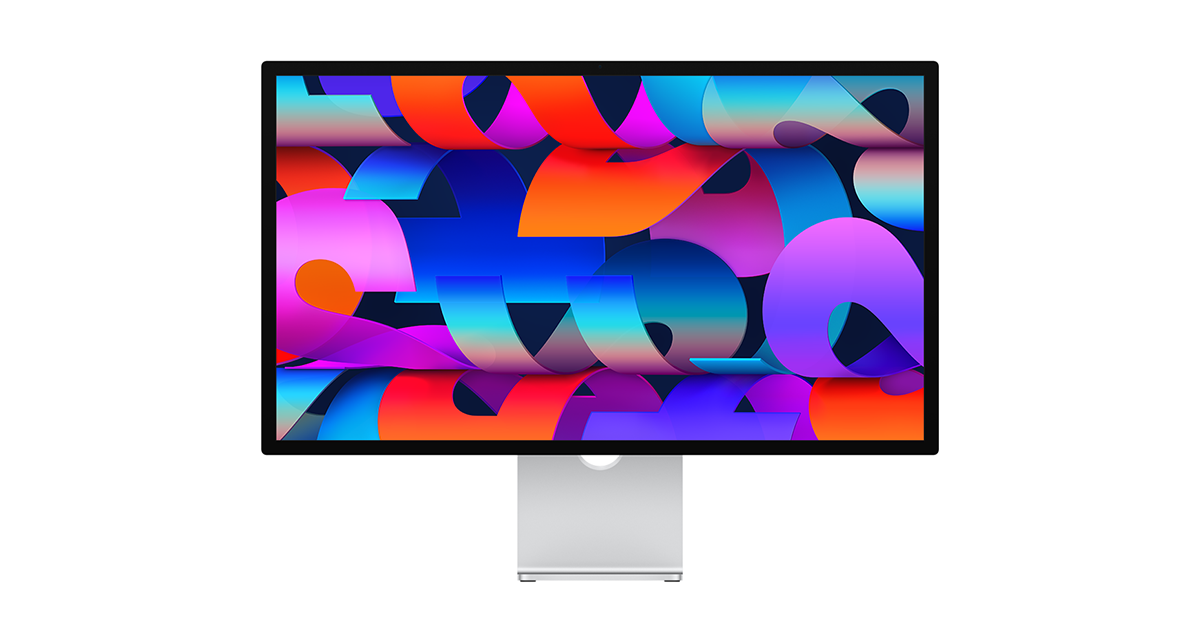 Minimalism and aesthetics are its strong points. I am sure it’s a nice monitor to use, but the price is very steep.
You can buy larger, high quality monitors for a lot less that will often have better connectivity options too. And for the money you would save, you can pick out a high end webcam, keyboard, mouse and even decent speakers. You would probably still be able to do that under the asking price of this monitor.
However, if you like having less cables around and not having a webcam perched on top of your monitor, it may be an option for some.
It also frustrates me with its connectivity choice. If I want to use this monitor with another computer either now or in the future, you end up rather limited in options.

Now admittedly, I think the last Apple display that I purchased new would have been… this beastie back in 1993:

I purchased it bundled with my LCIII, but gather it probably had an RRP of about AU$995, against the LCIII which was around AU$1,995. So - the computer was twice the cost of the display.

With a purchase price of $2,499 for the new Studio Display… I guess it make sense to be selling it alongside a $5k Mac Studio (although I see the base model Mac Studio is only $3,099). But…

Where is Apple’s $700 display to sell alongside the Mac Mini?

Ultimately, I know my next set of displays will be whatever followed my current 2008 Cinema Displays… I think the 27" Cinemas, for around $300 each on eBay. Apple wont be seeing any of my money directly for a long time.

I am happy to spend a decent amount of money on a good display and peripherals. But I can get them all for the cost of this monitor.

Now there is positives and negatives to each. But there are options to get a lot of nice gear for less dollars.

Apple wont be seeing any of my money directly for a long time.

Yeah, same here. After buying this second hand M1 Mac mini, which is awesome, for a great price, I’m looking at second hand all the way now!

I have only owned one Apple monitor, which was a piece of crap. I haven’t bought one since.

Over the past 30 years, at least as far as “Macs” go, it’s around 40/60 for me - new versus second hand. I have no qualms about buying second hand Macs. Just do some reasonable research first… and chances are you’ll do ok.

So it’s not like I’m an ideal Apple customer. But - that said - it has long been noted that Apple gear tends to survive and be useful for a long time - thus feeding the second hand Apple market. The high re-sale value would at least partly contribute to people being willing to buy new, sell, then buy new again. If Apple gear didn’t last - it would be interesting to see what effect that would have… (Actually - add to that 2 iMacs purchased second hand for my dad… so yeah - second hand rules.)

I haven’t had any major issues with Apple displays… one of my 2 current screens has some yellowing, but - I bought it when it was 10 years old, so I can live with it.

Marques Brownlee’s review is worth a look @cosmichobo.

As he points out, if you only compare it on the obvious specs then there are plenty of cheaper displays that seem equivalent. The obvious specs don’t fully cover it though. I’ve only recently got new monitors, so I’m not in the market, but I would’ve considered a couple of these. And Apple will probably fix the terrible webcam with a SW update soon. Probably the biggest stumble here I reckon.

The other thing about a product like this is that lots of people consider something like a Dell Ultrafine to be a high end monitor. The idea that it might somehow be worth paying 3 times that price seems crazy to many, which is fair enough, but any mid-range or better EIZO makes the ASD look like a bargain. And EIZOs are not renowned for their industrial design or seamless Mac integration. I don’t know if it’s a fair comparison - I haven’t seen a lot written about the ASD for colour accurate work yet - but there are a few high end markets for monitors and that’s where these are pitched.

As a previous owner of a 27" Thunderbolt Display, it was magical to live that one (ish) cable lifestyle. The sum of the parts makes it nice… I just don’t know if it’s $3k worth of nice.

Personally, I don’t get the whole Retina thing. I mean I get what it does, but I was running a non native “feels like 1920x1200” resolution to get more useable real estate on my last 15" MBP and when it was hooked up to the Thunderbolt display it wasn’t running Retina and I was happy. While I get my eyes are a little older so I don’t see as much as younger folks, it really didn’t bother me.

EDIT - ADDED:
Listening more to the latest ATP podcast, they do talk about this topic and make a few points.
Namely if you’ve been using and are used to Retina, 4K is likely seen as a step down. So if you want 5K there isn’t really any other options other than the LG 5K and this is probably worth the small premium for all the extra features.

We has a 27" iMac for a long while and still have MBP’s in the house and I’m not overly fussed when I switch to dock and non retina screens on this desk. Personally I would trade off a single retina screen for dual screens every day of the week… but again, personal preference for sure.

I agree on the non-retina requirement. For me, it’s way more about real estate and panel quality. My MBP16 has a lovely display on the road, but it’s still tiny really. At myself desk, my displays are all non-retina, and I honestly don’t miss it. Sure, it’d be nice, but no-one other than Apple makes a 30-inch class display in Retina, and no one period makes my setup anymore (20+30+20 matching) so I’ll just soldier on for a few years more hoping someone sees the light. I’ve had this triple display setup for 5 years now and I can’t fathom anything else being better. One big display in the middle with 2 matching displays (pixel density) on the side that match perfectly. I’ve tried all the various ultra wide options, and the gentle curve annoys my eyes but more the fact they stick the menu bar up top left doesn’t work for me. 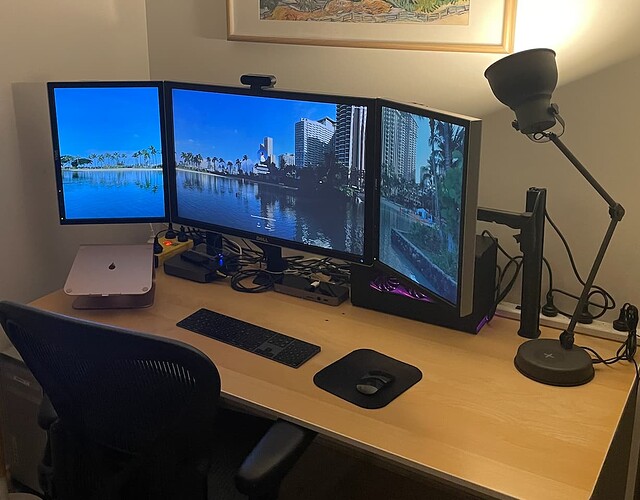 This is pic of my desk is with my previous Mac setup (2018 Mini + eGPU) to drive it. Now it all runs natively off a 16-inch MacBook Pro + a display link adapter to drive the 3rd display. Works perfectly.