Twice in about 3 days I’ve had calls from my father, who has somehow initiated some kind of lock screen on his M1 iMac.

He can see the desktop picture, but no Dock, or Menubar, with a password box in the middle of the screen requiring his user password.

It’s not a big deal… except - I’ve never experienced it before, and he kept telling me that he “couldn’t” enter the password where it was saying to enter it.

Eventually, I told him to click on the “password” box, and start typing. “Ahhhh”, he says, “That worked”.

So - when clicking in the password box, apparently it either doesn’t give the user feedback that you can now enter your password… or, my dad’s 75yo eyes were missing the cursor?

Either way… Is there a way to deactivate this lock screen? There’s no requirement for him to have it in his environment, so it’s just causing frustration…

Sure can – untick this box: 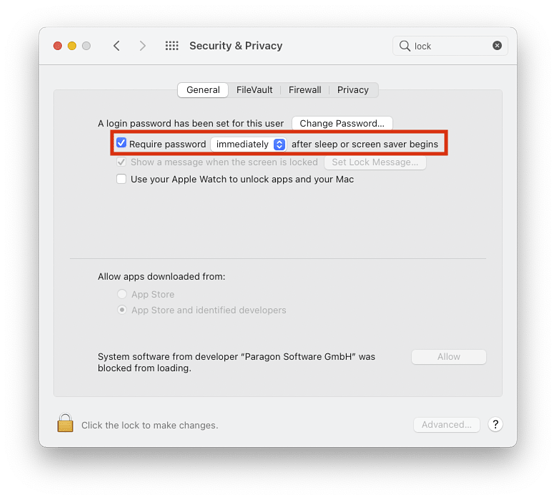 Oh is that all it is! Thanks @jaysee !

You may also need to disable the sleep (just turn display sleep on so you don’t wear it out). Modern OS always locks on sleep/wake I think.

I figured it was something “like” that, but I was confused because on my MacPro / Sierra, when it is on the lock screen, the desktop wallpaper gets blurred. But - and I got mum to take a picture of the screen and send it to me - on dad’s M1 iMac / Big Sur - it isn’t blurring the desktop. That was throwing me…

But - if I can stop the password requirement, hopefully it’ll stop it happening again.