Do you have access to an air compressor? If so, get all that dust out of it.
It’s amazing how much that dust increases fan speeds and temps in the 4,1 and 5,1.
When I first obtained my 5,1 it came from a house with cats. Was full of dust and fur. I was shocked how much dust came out of it. I saw temp drops of 10-15degC after clearing it all out.

FWIW I grabbed a Sapphire RX 580 Pulse 8GB from Amazon UK for $182 delivered to Australia.
Not as good as the deal of a free 5770 listed above though

One year on; nothing achieved.

Finally start of action. The SuperDrive sounds like it’s auditioning for a part in “Will it blend” - not just “noisy”, it seems to have trouble reading data (haven’t tried burning yet), sometimes sounding like it’s really crunching gears to get things done.

So - took it out, opened it up, sprayed some air, used some alcohol, put it all back together, and now sounding much better and reading discs without issue. Yay. Have to try a burn next.

Am now using Migration Assistant to import my old Mavericks data onto the 7200rpm disk that came with the machine, which has High Sierra installed. I’m a bit surprised though as it’s only showing speeds of around 44 MB/s? That’s between 2 internal drives. 500GB going to take about 4 hours…

Does that sound right?? The source disk is only 5400, whilst the High Sierra drive is 7200rpm…

Is that just a nudge by Apple (to buy FCPX) or is there actual change in the OS that no longer allows FCP7 to run?

Interesting - same goes for iPhoto, as well as iMovie 9, and Aperture… yet plenty of other media apps have no issue running on the “new” OS.

Have you been following MacRumors Mac Pro section of late?
You can upgrade the firmware of the 5,1’s to 140.0.0.0

The newer firmware does a number of things.

Thanks @leon - hadn’t been following that conversation - will have to take a look. 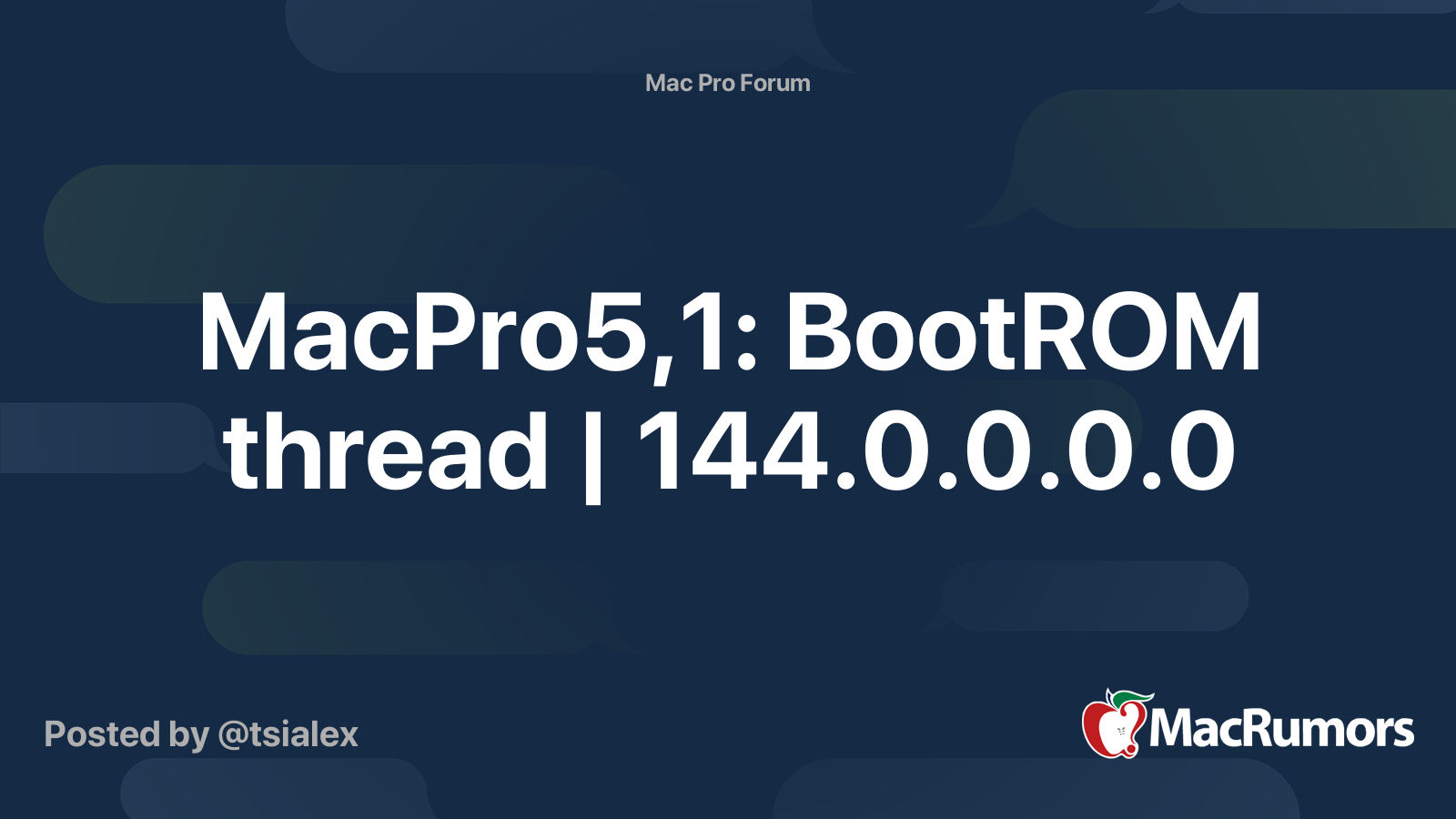 For MacPro5,1 BootROM upgrades, please read the first post of the thread below to know how to do the firmware...

I have to admit to a little buyer’s remorse - which I’d gone for dual CPU… At least most upgrades I am looking at will be transferable if/when the time comes.

Does the 4,1 have slower bus/etc speeds etc compared to the 5,1? I do recall reading that the 4,1 could be convinced via software that it was a 5,1… but wasn’t sure if it made them identical in abilities or not…?

4,1 and 5,1 are identical - the firmware is compatible. The CPUs shipped in the 5,1s were newer, so the RAM was faster. But if you upgrade the CPUs in the 4,1 (after flashing the firmware) the ram is faster.

My Mac Pro 6,1 was in at the Apple Store for a month so I reverted back to my 4,1/5,1. I went with dual X5677’s which are quad core @ 3.47GHz when I upgraded this one. The $ were significantly less when compared with the X5690 with the same single core clock. I threw the 2TB Samsung 960 Pro NVMe I had been using in my 6,1 onto a PCIe sled and am using the same physical drive with a second APFS partition on my old machine! (and having a GTX680 GPU allows me to encrypt my boot volume in 10.14 (the only way to do it - it’s a bit convoluted!).

I’m actually conflicted as to what to do now my 6,1 is ready to pickup. I’ve been really enjoying having 4x 3.5 bays internally, been ripping some new DVDs I’ve bought (for Plex) and even used my eSATA PCIe card to do some data archiving etc. Kinda nuts to go back to the 6,1 given it’s no-longer faster either!

I have to admit to a little buyer’s remorse - which I’d gone for dual CPU… At least most upgrades I am looking at will be transferable if/when the time comes.

A single 6-core CPU upgrade can be done easily, but the dual CPU models are noticeably I find. Also, be aware that Mojave is likely the end of the road for these machines - and even now, FileVault isn’t supported if you use any card newer than a GTX680 sadly (no way to unlock the drive as no EFI boot loader support when using an RX580 for example).

I’m considering downgrading to Sierra instead of High Sierra over the FCP issue (namely - no FCP7 on HS).

I can’t find a solution to correct the colour layer in FCPX, which leaves me having to start the project in pre-HS / FCP7, re-align the colour, then return to HS / FCPX. I’m also, after at least an hour’s attempts / googling, at a loss as to how to (completely) desaturate an image, which was a simple 1 step procedure in FCP7.

So whilst Mavericks is now feeling too old to go back to, I think I’m going to have to try Sierra out instead.

oh, gosh. It feels hilarous watching you talk about those OSs being too old. I’m still running 10.11.6

I’m jumping to 10.13 soon. i just need to figure out if i’ll be losing data if i try to bring over my current user data from the old girl. (chiefly i need to know if im gonna lose stuff with moving to APFS vs HFS+) as part of the move to a Mac Mini late 2012.

Just wondering what you have ended up doing with your 5,1 Mac Pro, Cosmic. I have just managed to resurrect my 6 core 3.33 after it has been in storage for a few years. Just trying to decide if I should sell it or do a few minor upgrades to use for Photoshop now that I am getting back into photography.

If you’re okay with running an older version of Photoshop - presumably a Creative Suite version, chuck an SSD into it and enjoy!

I still use a Mac Pro 5,1 as my Windows gaming PC.

It’s already got a couple of SSD’s in it but thinking about going the NVMe route & RAID 0 the old ones for Photoshop scratch. NVMe drives aren’t that expensive. Has already got a good Nvidea graphics card too but not Metal compliant. Will probably just go to High Sierra for the time being and see how that goes. Metal cards aren’t really that expensive either, to be honest, especially if you’re willing to go second hand. jaysee, what brand 580 do you have & where did you get it?

I haven’t done anything amazing with my 5,1 since my previous info - have the 1 x SSD in the lower optical bay, and BluRay up top. Same RAM as before, an extra 4TB WD Red…

For now I’m just in a holding pattern til something happens that changes things. (Story of my life, really.)