Installation of software on OS

Hi,
I am extremely new to iMacs (was given one, a 2009, about a week and a half ago) and after over 20 years on a PC I am wondering why on earth I didn’t do this earlier. (Only reason I was looking into iMacs was my wife really needs one for her new job) of course I couldn’t run any modern software offered so I used OpenCore Legacy Patcher and installed Monterey on it. To install software on Windows I needed to (to make sure it was successful) download an offline installer, turn off my firewall and Internet security, do an install and then a reboot to make sure it was all applied in the registry to work properly. When installing software on Mac do I need to do any of those steps or will it just install successfully? I’m just playing around with this old iMac to get used to it and then I plan to get the wife either a brand-new iMac or Mac mini.
Thank you very much for your help.

Nah, absolutely not. There’s 2 types of installation methods that you’ll come across.

The other is an installer - double clicking this will open a wizard that’ll walk you through installing the application which will then most likely land in your /Applications folder. To get to this, open Finder (happy face on the dock) then from the Go menu up top, choose Applications.

Coooool, thank you!
So obviously internet protection and firewalls don’t bother Macs and it wont need a reboot!!! Bit of a learning curb swapping to Mac but I am really loving it!

The 2009 iMac is pretty old, but still fully capable of most things.

If you are downloading applications from the Apple App Store, then everything will be pretty smooth as noted by @adamd. A lot of app developers on Mac will actually make it even easier for you - when you open the dmg file, you’ll get a directory that looks like this: 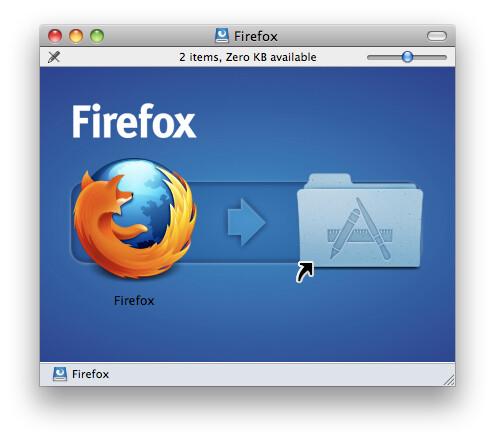 In that case - you just pick up the (in this case) Firefox icon, and drag it to the Application folder icon (which is a shortcut, as denoted by the arrow in the bottom left corner). It will then copy the Firefox app into your Applications folder. (Most apps on the Mac just comprise 1 “application” (ie executable) file, and nothing else…)

Then, you can open your Applications folder and double-click on the new app icon (ie Firefox) to run the app. If you want to keep the item in your dock, right-click on the item when it’s in the dock, and under “Options” there’s “Keep in dock”.

If you are trying to instal something that’s not from the App Store… you may get a pop-up saying that the application is from an “unidentified developer”. This is Apple’s way of trying to protect people from themselves… but doesn’t mean you can’t run the application. Just make sure you KNOW it’s genuine, then you go into the System Prefs, Security & Privacy, and General tab. You’ll see a box there to approve the app that you just tried to open.

Thank you, all over it now! So Apple is not as fussy as Microsoft as in needing to turn off firewalls and reboot…?

Nope! Not at all.

In honesty, I hardly turn firewalls on… In my own home (and families homes…) I have set up UniFi Security Gateways which limit traffic coming into/out of the networks.