Palm Pilots were cool, but my favourite PDA at the time was the Psion. I had a Series 3 - it worked for me! 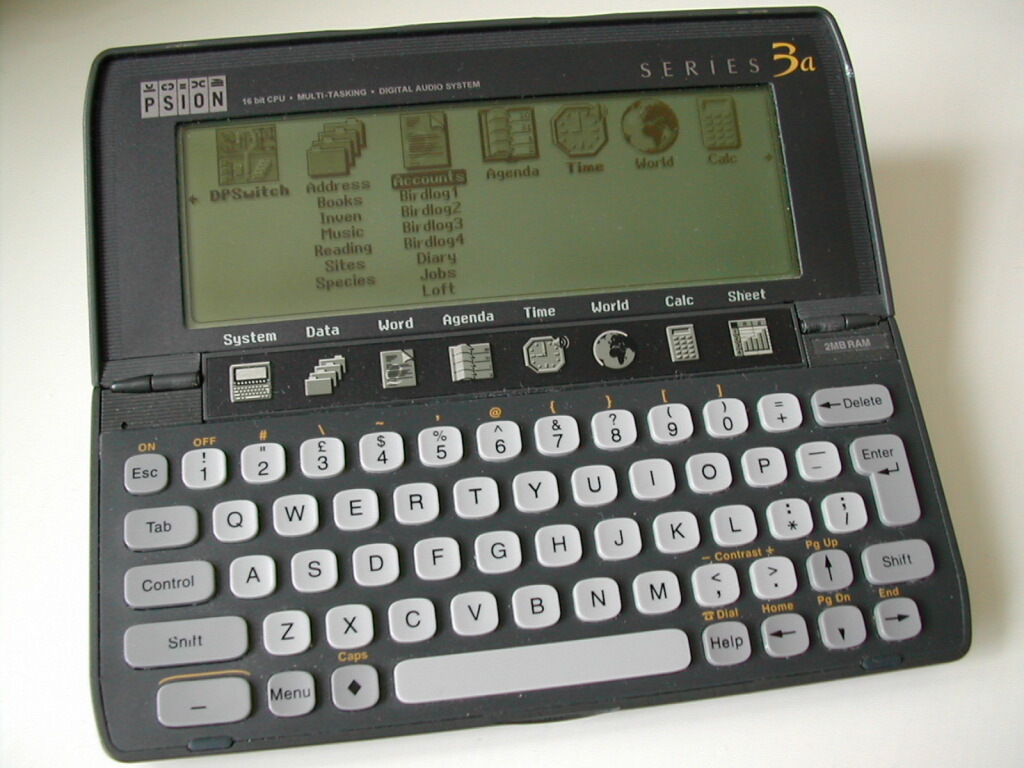 Still got my old Compaq iPaq sitting around at home somewhere. Battery’s pretty much dead though.

I had a series of PDAs, initially Palm but later windows based. Mostly I used them as eBook readers before dedicated readers were available. I think my favorite one was the iPaq 1940 because it was slimmer than most of it’s contemporaries. It’s in a box in the shed (somewhere).

I remember using one of those with an AMAZING fold up keyboard by HP that had an unbroken space bar and full size keys. I have fond memories of taking it on my first trip to the US in 2004 and typing a LOT on it!

I think this was it:

Man, I wish they would make that keyboard again with a lightning port (or bluetooth would be ok I guess).

Around this time I remember spending so, many, hours on “the missing sync” software. Man that software was CRAP! Billed a client a LOT of time when he went and bought an O2 PDA phone to try to get it all working!!

For me, I used a Treo 180g and then Treo 650 in that era - as they worked natively with Entrouage (with a palm plugin). They were seriously great phones for that era (early 2000s)! Still got them both somewhere!!

As far as favourite iPhones go, in terms of design I loved the 3GS the most (so nice to hold!) but in terms of functionality, the 5S is my favourite. I recently went back from a 6S to a 5S because the form factor is so much better IMHO.

Sorry for the off-topic thread drift - but I used to love my Treos!!!

Back in the late 90’s I had a Cassiopeia pocket PC with all of it’s Windows CE greyscale goodness. I could take notes at uni (and draw sketches on the screen with the stylus) and it would sync stuff to Windows 95 too! Awesome.

I moved onto various palm thingies including the Compaq iPaq and the later HP branded devices until I ended up with an O2 Mini and then a Dopod and maybe a HTC in there too which I think was my last non iOS phone. So many custom ROM’s… 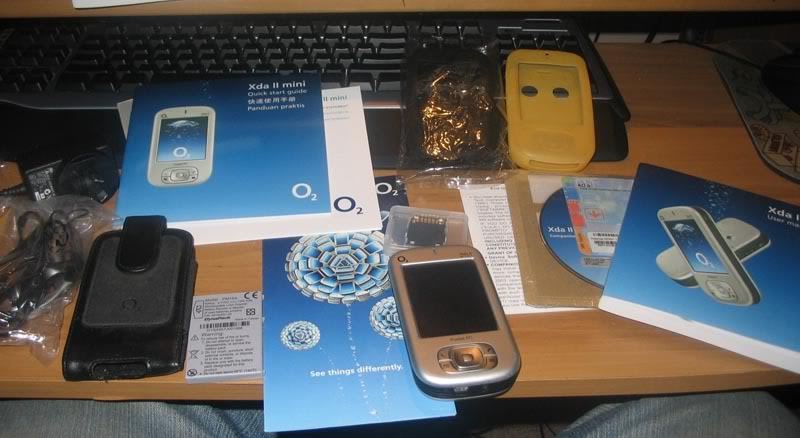 Mind you I’m a real nerd from way back and all of these were self funded I might add, so no work provided phones!

As for Apple’s products, that first gen iPad still holds a special place for me. I never really had a use for, but it was just a magical piece of technology, different to everything that came before it! Sure it dated very quickly, but it is where it all started.

Again, sorry for the thread drift (perhaps a moderator can split the posts on PDAs into a new thread) but I had an O2 mini too and loved it. It’s now non-functioning and being used as a toy phone by the kids. They swipe the screen and pretend.

People remember “graffiti” on the Palm Pilots? It worked quite well. Not as good as Newton’s cursive handwriting recognition which was incredible even by today’s standards.

One device that I spent too much money on that simply wasn’t what it was hyped up to be was the Nokia Communicator 9000 although it was impressive it just wasn’t that useful.

It was (arguably) the first internet connected phone available off the shelf (ie the first smart phone). Mine was the big one on the left of the picture. 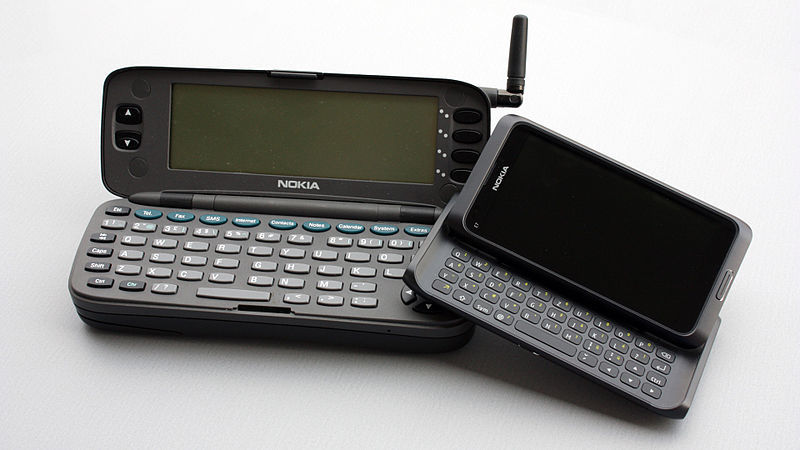 Yes! Graffiti was great. I reckon I could still have a good go at most of the letters.

Pre Palm Pilot I had a HandSpring Visor Deluxe which was bloody amazing at the time. It ran PalmOS and was a split off from Palm briefly before going back into Palm. They were the company that produced the Treos originally.

I loved my Visor. Had the little folding keyboard attachment for it too, used to take notes in class with it.

Yep. My Treo 180g was a Handspring. I think from the 600 onwards they were Palms again.

I suspect I couldn’t do Graffiti these days even if my life depended upon it despite having owned a IIIe, a IIIc and a V

I used to teach Graffiti my own writing shortcuts. It was actually just as, if not faster, than typing. I did move to having keyboards later - did flirt with the Nokia Communicator, and then Blackberries, before the advent of the legendary iPhone which changed everything.

I had a Casio thing, very basic, my boss had the casiopia, he used it all the time. Got the Palm IIIx which was really used and paired it with my Nokia 5510 and then my Nokia 8210 which worked well. Always wanted a phone, PDA and music player in one. The 3GS replaced them all for me. By then I had got a Palm V and then I got an HP iPaq. I sold it when I got a Sony Ericcson PDA like phone, and then the iPhone trumped them all.

I recently found an old Palm Tungsten E while cleaning out the shed last weekend. Still powers up, but the battery is toast.

Also have an Apple Newton MessagePad (OMP) on my desk, but I’m not as fond of that one. The battery life was abysmal (4x AAA batteries would last maybe through a day at best) and the handwriting recognition was average even after allowing it to learn my handwriting for a while. The screen failed on it a few years ago. Still, it was somewhat fun while it lasted.

Not a PDA but at one point I had an Ericsson T10.

It also had this keyboard attachment which in retrospect was horrible and a complete waste of money. It pretty much translated the key presses into T9 (so if you pressed C you could see it cycle through A & B first.) and it also had this really weird and horrible syntax where you could text a number and it would convert it to an email.

This was my 2nd last phone (I lost it on a night out. Was replaced by the 8GB version) before changing to Mac (I was a Windows user back then). Nokia N95. I loved this phone.

And finally. The last PDA I had before going with iPhones full time. The 2nd generation iPod Touch which was released around the same time as the iPhone 3G. It was that awkward period where the iPod Touch was more powerful than the iPhone. 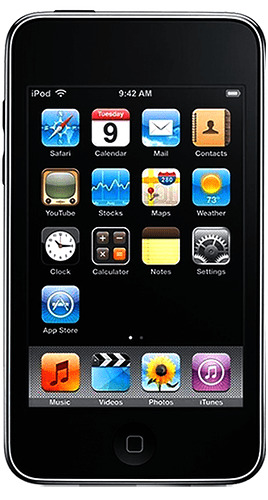 I so wanted the Nokia Communicator back in the day!