This review is of the wireless CarPlay/android auto head unit sold by Kenwood since 2019.

Specifications
The Kenwood DMX8019DABS is a Double DIN mechless head unit. Mechless means it does not have a DVD player (or cassettes for those older people), it’s just radio (including digital) and USB, Bluetooth or wi-fi connections to USB storage devices and phones. It also does not have built in navigation software, but hey, you are buying this to use your phone’s navigation apps…

The main feature that makes this of particular interest is the wireless CarPlay. When it first came out it would not do wireless android Auto in Australia, because Google had not enabled it in Australia. However, I am told that the latest version of android includes this capability, so if your android phone can run the latest version of android, it might work wirelessly too.

The RRP of this unit is AUD$899 including a GST of 10%. However you can often get it for less and I have seen it for about $590 incl. GST on a 30% off sale at Autobarn. You might find it cheaper occasionally on eBay.

In my Mazda 3 BL 2011 I needed to install a custom fascia from Aerpro. In some older cars the double DIN will just slot straight in. Here is a before picture: 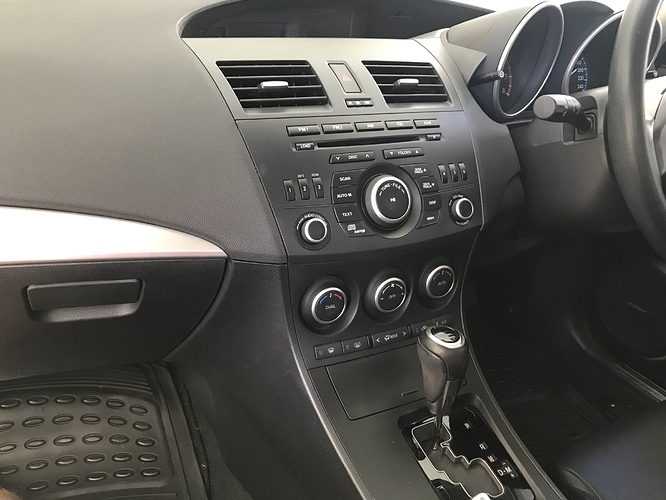 The other thing that is an added complication for wireless CarPlay is that Apple wants you to connect to your car’s speed sensor wire. This requirement is not obvious, and to be frank was a bridge too far for my skills so I ended up paying someone to complete the install. My Mazda has a Bose amplifier and speaker set up that also made things a bit more complicated. Thus for my book I would buy the head unit locally and no doubt the shop will do a cheap install for you. Autobarn charge a couple of hundred dollars for an install, depending on what you are installing, and the make and model of vehicle no doubt.

It is unfortunate that modern cars have ditched the double DIN or single DIN and the entertainment system is more widely integrated into the dashboard, and include many car functions. But for older cars these Double DIN units are the bee’s knees. Newer cars of course tend to have wired CarPlay already, so if you want wireless CarPlay in those you need a product like CPLAY2air which connects to your car’s USB port and acts as a Wi-Fi bridge to your iPhone. It’s cheaper too so don’t feel bad.

Appearance
The DMX is a beautiful unit, and with the aerpro facsia in my mazda looks like it was original. 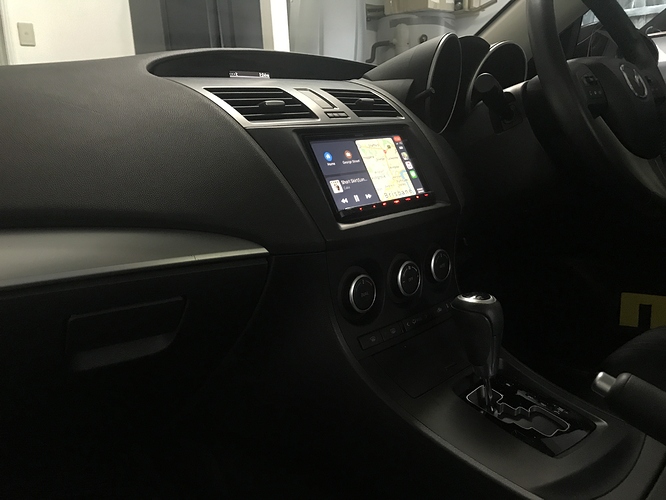 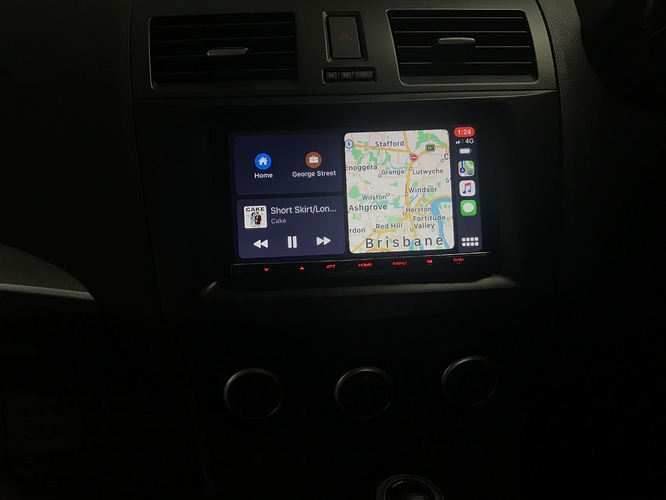 The screen is beautiful. It is very bright and during the day glare under the bright tropic sun of northern Australia is no issue at all. At night it can be too bright and you definitely want dark mode turned on. It does smudge a bit, particularly with teenage grubby fingers, but usually the brightness deals with that too.

When I hire cars with CarPlay, the resistive screens that are generally available look pretty ordinary in comparison to this unit, yet they are still functional.

Kenwood OS
Kenwood has an overall pretty good OS, almost a pity anyone with CarPlay will never use most of it. The digital radio works as advertised, as do the other radio features and the set up is easy, including for cameras, of which it can take up to three. You can even load your own photos onto it, but honestly, you aren’t buying this for those features. It is for Wireless CarPlay.

Boot time from start up until it displays the very annoying and in reality useless Nanny State screen with the “I Agree” button is about 15 seconds. To connect to my old iPhone 7 with a crappy battery takes less than 30 seconds from engine turn on. The reverse camera of course automatically turns on when you put the car in reverse, and takes over the screen. The reverse cam does this as soon as you put the car in reverse, you do not need to wait for full boot up of the head unit.

The Kenwood can be set up for wireless CarPlay with up to five iPhones, which is just enough for our household, plus you can always still connect over USB, as it has two USB ports for ordinary CarPlay, USB storage devices etc, and an HDMI.

The Kenwood will try to wirelessly connect with a previously setup iPhone in range at start up. If there are multiple iPhones in the car, it will connect to the one it was last running. You can manually change this by a less user friendly way than I would prefer. You have to press the physical home button to get to the home screen, then the on screen setup button, then AV, then CarPlay devices, then choose the phone you want to use. I would have thought some sort of pop up list of already setup iPhones when you long press the CarPlay button would be a good alternative.

Kenwood do offer updates to the firmware and OS. I notice there is one already on the Kenwood website that is apparently going to improve wireless CarPlay performance, but I haven’t got around to downloading it.

Wireless CarPlay performance
It works as advertised. Once connected, you can use all the CarPlay features you want, which are particularly good with iOS 13. On my old iPhone 7 with a bad battery running at 81% original capacity, it uses about 8-9% of the battery per half hour. On my wife’s XS Max (90% original capacity) it uses about 5% per half hour. So absolutely no worries on a commute, nicking down to the shops, going to that new restaurant, parties or ferrying trips for dance school.

On longer trips of course you will want to plug into USB if you want all day use of your phone. It will charge your phone while you use it. I have not tried wireless charging and wireless CarPlay, but I would expect it would at the least hold its own, and regardless would be subject to a wide number of variables like if you have a case, what type of case and what type of wireless charger you have.

I have had the occasional trouble connecting wirelessly to the head unit, although I suspect it may have something to do with the way my old iPhone tries to preserve the crappy battery. I find that all I need to do is activate my homescreen on the iPhone by a side button press or on the home button, and low, it connects! Otherwise it is the semi tedious connection process described above.

Would I recommend it.

Definitely. Very, very happy with it.