Since I started collecting Nintendo 64 games and accessories, I went looking for a suitable CRT monitor to connect it all to. I ended up coming across two compatible displays at once - a Sony 14" Professional Video Monitor (PVM-14L2) and a Fujitsu General FGS251 TV.

The Sony monitor was a score in itself, and I would like to use it as a production monitor for a video setup at some point. But I was even more impressed with the capabilities of the Fujitsu General, with native RGB, a digital audio processor, built-in stereo speakers and a sharp, vibrant CRT. I wanted to use it for more than just casual games, and started looking into other ideas.

Someone on Reddit suggested it would be neat to somehow connect it to one of the various fan-made streams simulating classic television networks, like Nickelodeon or Cartoon Network. It’s possible to export video to VHS, or PVR, or access streaming video on TV connected devices, but I wanted more control over the content.

With some additional equipment, the 1997 TV Starter Kit was born. 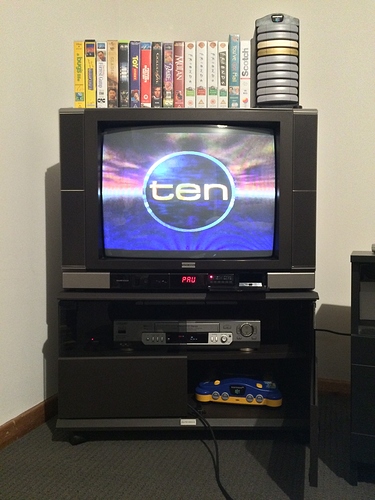 The video stream is generated by a host computer, and delivered via digital HDMI to a HDMI to Composite video converter. It’s then handed to the VCR, which serves as a video switcher between the computer input and Nintendo 64 (and it can record the inputs to VHS cassette if desired), and then delivered through to the TV. 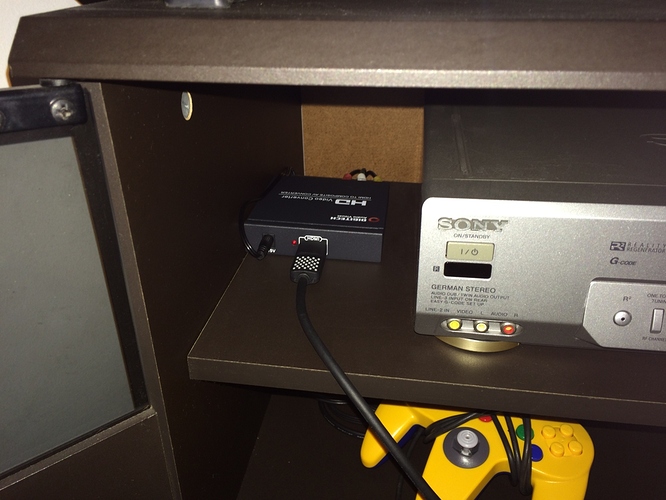 Where the magic happens is on the host computer itself. The HDMI to Composite converter appears to the computer - in this case, a MacBook Air - as a secondary display. VLC handles the scheduling, queueing, streaming (from local disk, network or internet) and video pre-processing. 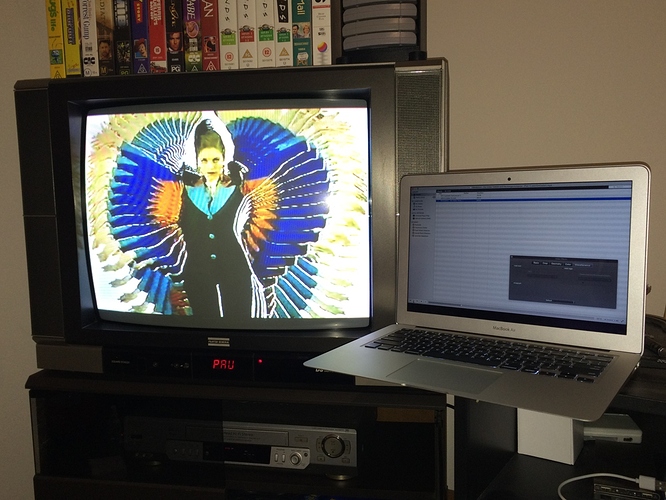 And if anyone is wondering, the video is “Revolution” from NewTek, a demo reel for the Video Toaster for Commodore Amiga from 1991.

VLC is configured to use this secondary display as its video output device, in 576i PAL resolution, with no on-screen display or control overlay, and with 4:3 crop or aspect ratio resize where needed. This means the HDMI to Composite converter does no downscaling - the computer running VLC handles it instead. This preserves video quality, but also allows for some interesting effects, like selective crop, moving the video along the X and Y axis, colour adjustments, video effects and overlays.

I can import episodes of TV shows, commercials and network idents, from a local drive and over the internet, and mix both sources in one playlist if I choose to. (Although the internet connection here is too slow to handle real-time playback.) It’s like having a television station in a box. I can even add a semi-transparent network identifier graphic video overlay to all of the videos if I like. 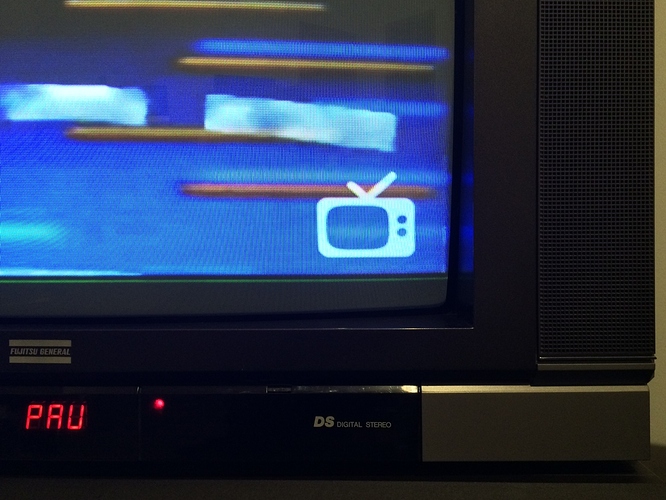 And then when it’s done, throw it across to the TV and record it onto a 3 hour LP VHS cassette.

There’s something fun about combining new technology with old to recreate an era of entertainment and set a mood. With a few clicks it’s possible to create an entire evening of broadcasting from any era I choose, combining source material from my own media collection and YouTube.

I love classic technology and video production, so I’m having a blast with this.

Now I’m thinking about what comes next. I’ve considered transmitting the video signal via VHF to an actual analogue TV channel frequency, so the computer’s video output can be picked up with a standard “rabbit ears” antenna, but the equipment needed for that is fairly expensive, so if I do, that’ll be something that comes later.

Is there a Community Television Station in your area? eg “Channel 31” in Melbourne…

I thought watching “The Goodies” on my TAM via VCR back in 1998 was cool… but you take the cake.

r/nostalgia - 90's TV cabinet. I remember needing to push on the glass doors to... 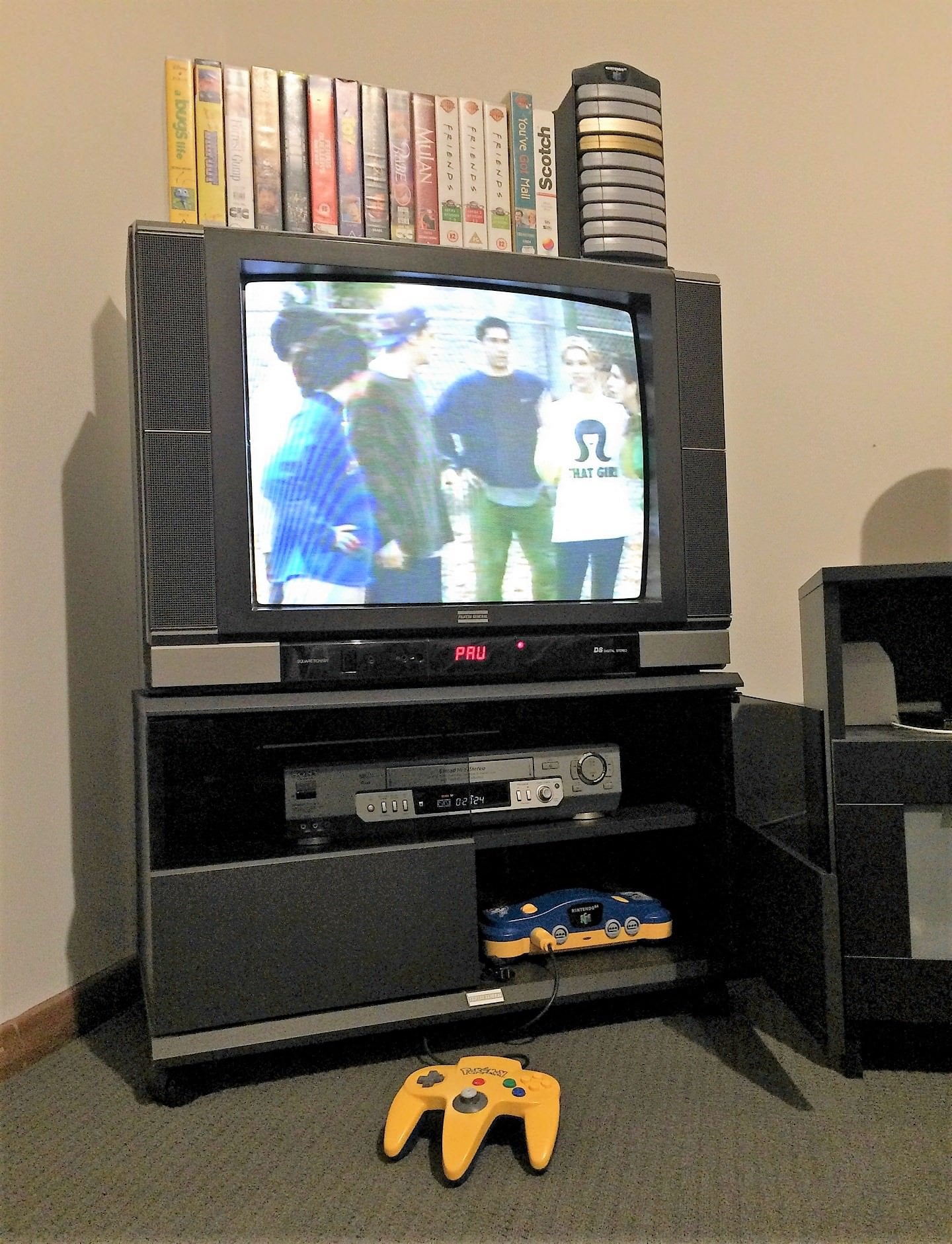 This however is me. Looks like someone took my photo and reposted it as their own. People will knock off anything!
Well your plagiarists are enjoying the ride

Hot Fudge Sundae that is annoying when people steal your stuff, without so much as a footnote! 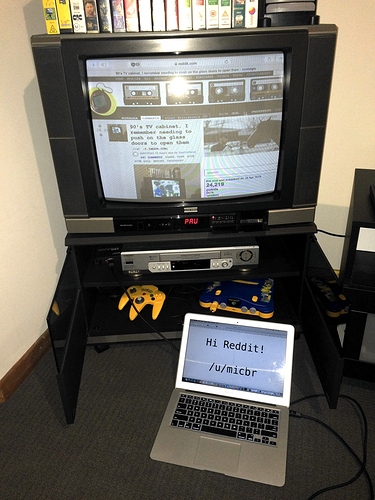 How bizarre someone trying to pretend that’s theirs!

Did you comment on the thread with that pic? I couldn’t see it…

Where did you post that photo? Or did an Appletalker redditor copy your photo to reap karma?

Did you comment on the thread with that pic? I couldn’t see it…

I did, but it’s buried much further down since it doesn’t have anywhere near as many upvotes as the other comments.

Where did you post that photo? Or did an Appletalker redditor copy your photo to reap karma?

Over on Reddit /r/90s a couple of weeks ago.

Ahh - I missed that you had a thread of your own on Reddit and thought the two links were the same!

I created a script that automatically detects the TV, then launches VLC with some configuration presets for playback.

Basically it checks the WindowServer configuration for connected displays, and presents a list of available video devices. The TV converter identifies as “SMB2230H”. It also switches a default sound device to the SMB2230H (via HDMI). Then it launches VLC with fullscreen default, 4:3 crop, separate window for playback and control, no on-screen elements and with the fullscreen video to always use the second display (HDMI out). 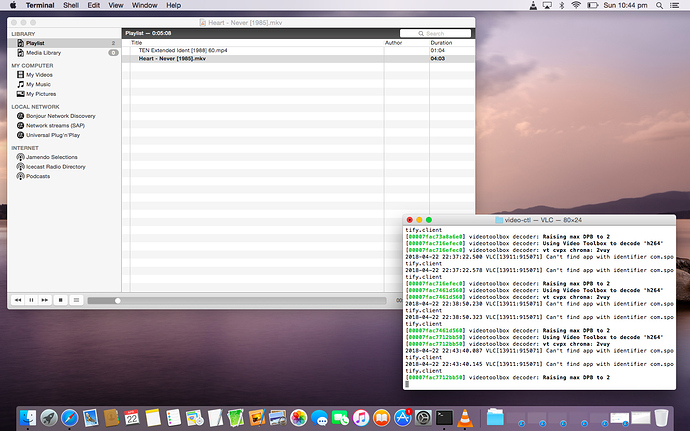 Unfortunately some of the command line parameters needed to make this work were broken in VLC 2.8, and VLC 3.0 is incredibly unstable. So it’s more a proof of concept rather than a practical solution. Another option could be to use VLC 2.8 and load a custom configuration file with the alterations pre-made instead.

But it works, and it resolves the issue of videos in widescreen displaying either scaled or clipped outside the 4:3 aspect ratio of the tube. And it makes this old TV certainly watchable for content both old and new.

I’ve combined some of my AV equipment to create a basic broadcast setup. This recreates the VHF analogue TV transmission that served Australia from 1956 to 2013, and sends it via coaxial cable to the antenna connection on the TV. 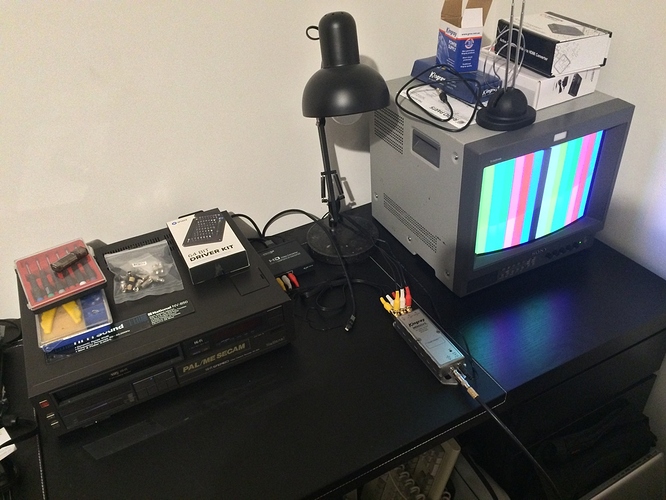 The converter is connected into three splitters. These split the composite and audio signals, and a secondary composite cable is connected from the splitter to a Sony PVM-14L2 video monitor. This provides a means of viewing the output of the converter, and whatever video (and audio) is presented through the PVM is identical to the signal being delivered to the modulator.

The straight connections through each splitter are connected to a Kingray MD100VS A2 Stereo DSB VHF Modulator. This VHF modulator combines the video and separate audio channels and modulates it into an RF signal on the VHF band between 44 and 470 MHz. This RF signal is what analog TVs would receive over the airwaves from the transmission tower.

I’ve configured the unit to modulate onto the 209.25MHz carrier frequency. In Australia this corresponds to VHF channel 10, and was used for broadcasting the analog TV transmission from Network Ten.

The RF output from the modulator is connected to 75 Ohm Air Dielectric coaxial cable, where it’s delivered directly to the antenna connection on the back of the TV. 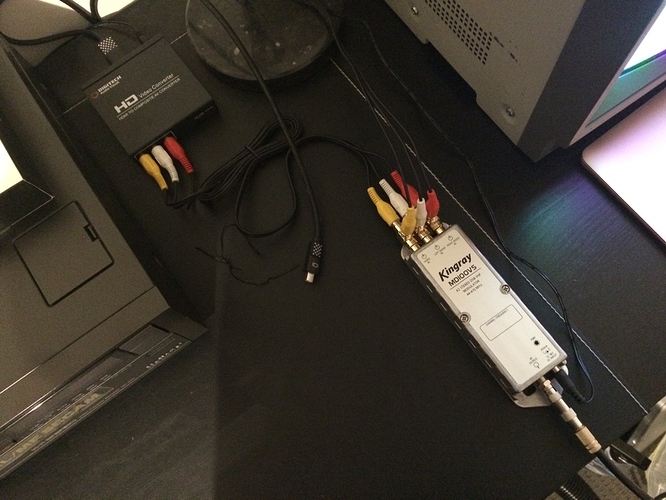 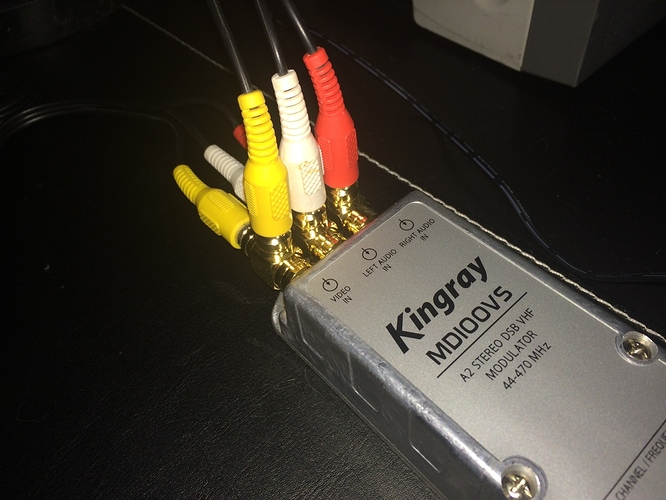 It is possible in theory to connect this output to an amplifier and separate antenna for transmission over the air, receivable on standard rabbit ears. However the Australian Government and the Australian Communications and Media Authority (ACMA) are extremely strict on unlicensed transmissions.

So the VHF modulator, the coaxial cable connected as the output and all fittings in between are all shielded to prevent transmitting unwanted noise and interference. The case of the modulator should also be grounded, which I should be able to do by grounding a mounting bracket or running a screw directly through the modulator mounts, a ring terminal and a wire connected to the house service ground.

Even so, the transmit power across the cable is rather low. Even if I connect an antenna, the range for a visible picture is around 2-3 metres. A completely clear picture isn’t possible over the air with this equipment in its current form. Over the cable, it’s perfectly clear and sharp.

And because I can, here’s the “Ten Out of Ten” Network Ten station ident from SAS-10 Adelaide (1986) being transmitted once again on VHF Channel 10. 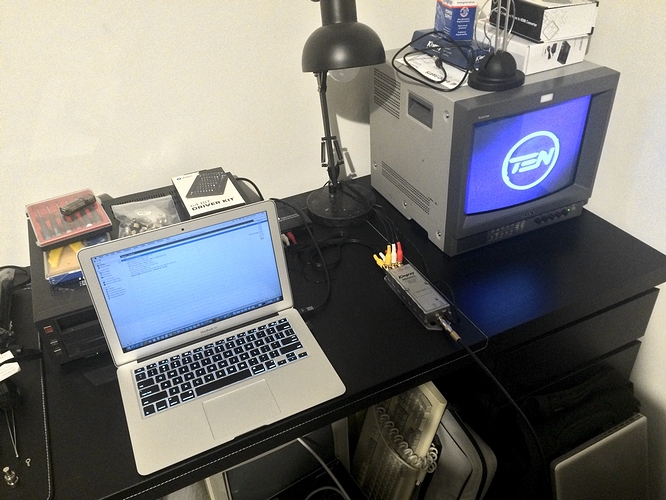 The VCR pictured is a 1984 National (Panasonic) NV-850 that needs a service, and isn’t connected into the system yet. It otherwise wouldn’t be required, but it does have digital VU meters with peak indication, which could be useful for monitoring audio levels.

The TV developed a buzzing sound when playing audio above a certain volume or with intense bass. So off came the back cover for a clean and service.

CRT TVs aren’t as sophisticated or complicated as modern TVs, but you certainly wouldn’t think so from looking at them. 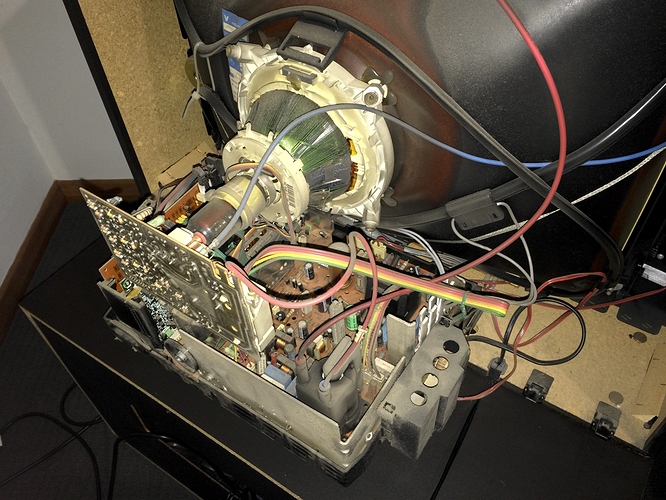 This particular tube operates at 26 kilovolts, or 26,000 volts. Sounds like a lot, but the beam current is rather low - 1.4mA. Still, that charge remains in the tube when powered off, and instead of discharging it up my arm while brushing the dust out, we’ll discharge it to ground instead. 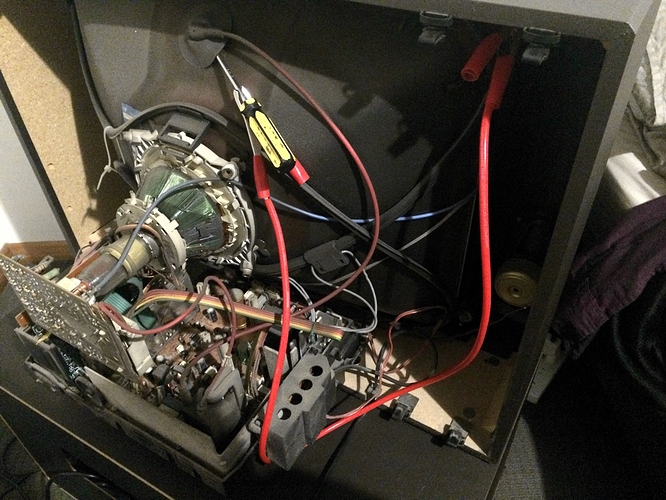 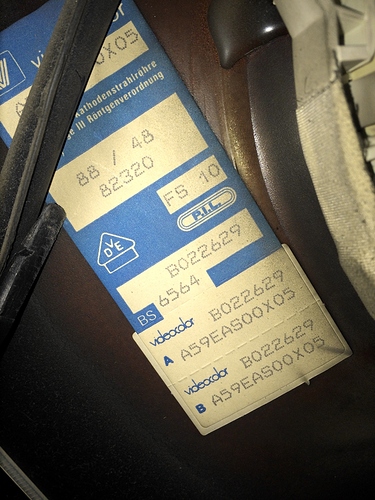 There’s almost no information available online about this TV, and the disassembly reveals why - it’s a rebranded Seleco 28SS369, manufactured in Italy.

Out come the speakers next, and with them, the source of our buzzing sound. 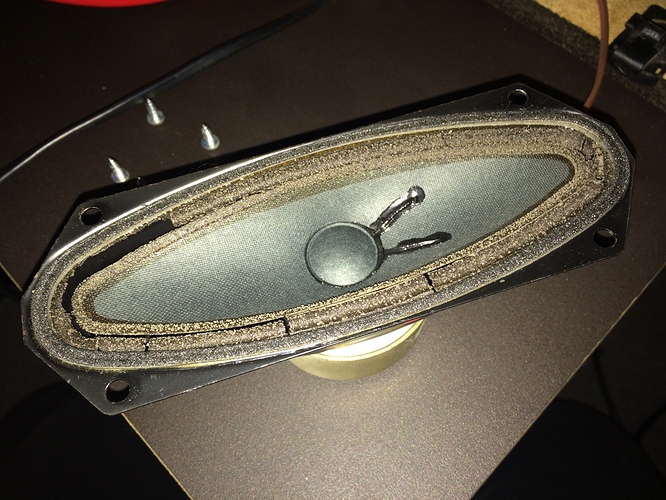 Three decades isn’t kind to speaker suspension foam. Unfortunately these speakers are an odd shape that almost nobody makes anymore, so I can either make brackets to fit a different sized speaker, or look into having these ones repaired. They still work for now, albeit at a lower volume.

There’s mounting space for additional tweeters as well, and these are a more normal size and shape. A 4-speaker conversion could be an option in the future. 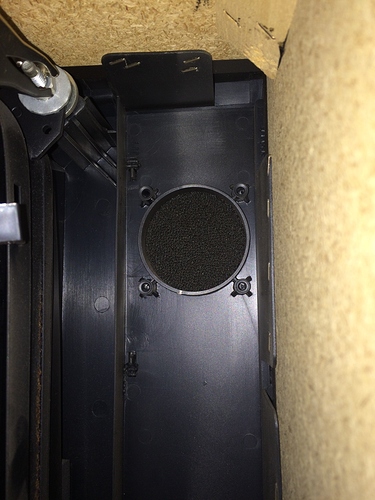 But cleaning up the inside went well, and back together it goes. It’s difficult to capture in photos, but the picture quality is excellent. Vintage Nintendo and Sega game systems look remarkably sharp and clear, and the Nintendo 64 looks right at home connected to a CRT. 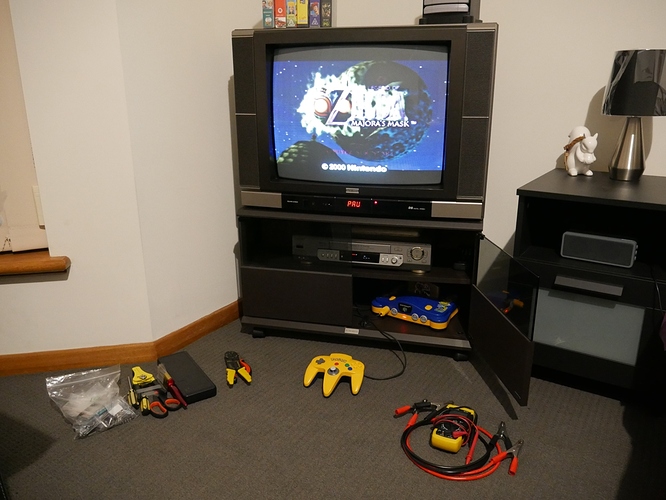 Great little update there. This thread is what has encouraged me to drag out all my old consoles and enjoy them with my son.

Over the past school holidays I dragged out my NES to play with my 7 y.o son. I have an old CRT Sony in storage that I’ve kept so I can use the Light Gun with the NES as it has the proper 50Hz refresh rate but I couldn’t be bothered pulling it out.

Connected NES to my LCD TV for a bit of SMB1, 3, TMNT, Arch Rivals and ExciteBike.

Sadly, the NES to S-video on the LCD just looked woeful.
Quick trip to EB games and we have a NES Classic (I got him a SNES classic from Christmas as well) which connected via HDMI looks fantastic.

Had a great week playing SMB3 and Bubble Bobble with him.

@iMic When I was at Uni I wrote a paper on Baird & Farnsworth’s adaptations of the Cathode-Ray Tube… I’d much rather be writing a paper on it than working with one. 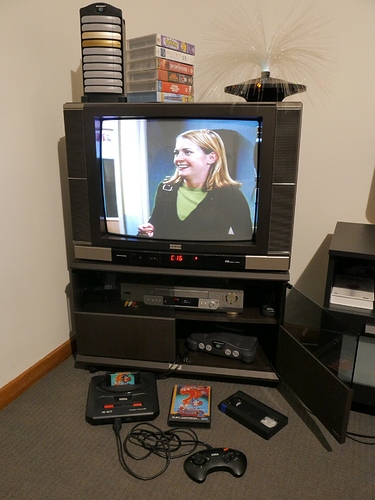 The transmission equipment is a little more dialled in, so the picture is a little sharper, and the throw distance is much further with the addition of an external amplifier. I’m now working on combining the scaler, modulator, amplifier, switching equipment, power supply and external regulator into a single rack-mount enclosure.

Since the video equipment is connected in via the VCR, I was curious if it was possible to record something onto VHS, like “SEGA NIGHTS 1991” from @benflyingretro on Instagram.

As it turns out, it is possible.

And it isn’t common to come across a near-mint condition 19" Sony Trinitron from 1990, so I couldn’t turn this one down when the opportunity came up. When it comes to image quality, the Nintendo 64 and Sega Mega Drive both love this thing.