Google Home as an Airplay Speaker

So I mentioned this in another thread but people were interested so I figure it deserves a thread on it’s own.

I’ve been running Home Assistant https://home-assistant.io on a Raspberry Pi.

It’s basically a custom distro which you load onto an SD card. You can only access it via SSH, a Web interface, you don’t actually need to plug a keyboard mouse or even monitor into the pi itself, it can just sit in a cupboard somewhere. It is also possible to install it in Raspbian so you can do other stuff with the pi, though I haven’t gone down that road.

Basically Home assistant will control most Home Automation type gadgets via it’s web interface. Most of them it discovers automatically. It found all our Wemo’s, TP Link Switches, Google Homes, Apple TV, etc.

Then you can install plug-ins and components to do extra stuff. Like Homebridge, which connects non homekit products to homekit so you can control them with Siri.

As I mentioned in the other thread, a new Plug in came out recently, called “Aircast”. It turns any Google home or Chromecast devices on your network into Airplay speakers. They show up on your ios devices or in itunes, see below: 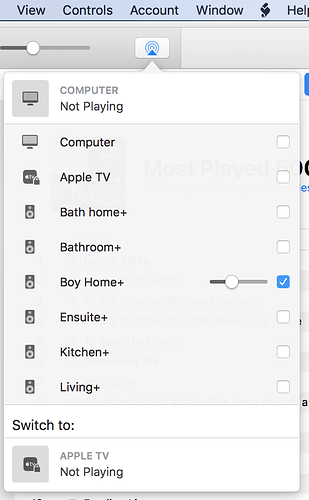 There’s a heap of other stuff you can do with home assistant as well. You can plug in a Mic and speakers and it becomes another Google Assistant (though it won’t play music). You can run Pi-hole and block all adds on your network but using a custom DNS. You can plug in a relay board to the Pi GPIO Pins and control other devices like garage doors or electronic gates etc if you are handy with a soldering iron and like taking remote controls to bits

I won’t post step by step instructions but if anyone has questions ask away, otherwise, as always, google is your friend. The Home Assistant website is awesome. The cost of a raspberry pi and a couple of Google homes is still way cheaper than Homepod!

EDIT so I should explain that I have four google homes (doesn’t matter if it’s the mini or the big one, I have three mini’s and one big one). When you have more than one you can create groups. So you can see I have “Bath home” and “Boy Home”. Boy Home is all the speakers… so if I say “Hey Google play ABC Radio Melbourne on Boy Home” she plays the radio on all four speakers at once. If I say “Bath home” it’s only on the two in the bathrooms. Those groups show up as separate Airplay Destinations.

If don’t yet have a Google Home, i would definitely recommend starting with the Mini. It sounds amazing considering it’s size, and if you shop around it can be had very cheaply. We have the big one in our living room, and mini’s in the kitchen, and both bathrooms though the sound from those emanantes all through our place. I’m trying to find a cheap Chromecast Audio so I can move the Big Google home into a bedroom and then use the Chromecast to play music in the living room via our amplifier.

I think I’ve looked at this before, or something very similar. I think there is going to be a big market for selling off the shelf boxes that allow all the different services to talk to each other. Such a shame they all have competing standards

I should also add I bought an Echo Dot to play with last weekend. Took it back the next day. Although it’s a clever device, it just felt very clunky compared to the Google Home/Assistant. Not to mention Alexa talks quite slowly. About the only good thing was being able to call it “Computer” instead of “Alexa”. But I hear that this might finally be coming to Google home sometime soon.

I would want to call it “house”

Thanks for sharing this! Just got my Home Assistant running with Aircast all setup and can successfully airplay to my Google Home Mini’s. Im noticing a delay though, between my Airplay devices and the GH devices, have you found the same thing? Any chance your casting to both at the same time?

I’m guessing that Home Assitant integration allows for a lot more logic to be incorporated into automation things as I’m fairly invested in Hue lighting as well as Google Home and Homekit - it woulde be nice to be able to extend their functionality.

Just wondering if anybody using a Pi has managed to get Airplay 2 working with it. I don’t know if Apple plans on releasing a firmware update to their Airport Express range to enable it, so I’m looking for alternatives.

Hey! Can I ask how you got the Home Assistant (on the raspberry pi) to become a google Assistant?