First two episodes of Discovery are now on Netflix.

Depends entirely on your point of view. I’m not yet convinced about the changes to various aspects of STar Trek by comparison with the previous series’ but thats no reason to dismiss it out of hand. If you went in expecting it be anything like any of the others, you would be bound to be disappointed. I liked it.

It’s not Star Trek. It’s sort of Battlstar Galactica with Star Trek iconography and sounds… and also Sarek. Because why not.

I’ll take it for what it is, and I’ll probably enjoy it, but I won’t love it.

Disagree. Loved it. Beautiful aesthetic. They’ve done a wonderful job of breathing some new life into things. I’m very happy with changes being made, I am not in the “it’s not Star Trek” camp. If that were the case nothing would ever advance or change.

I said I’ll take it for what it is, and I’ll enjoy it. I was sold after these two episodes, but I also love the new BSG and similar arc-style SF shows. Not to mention my love of Honor Harrington, Nick Seafort, etc.

But it’s not in that same episodic mold that all previous Treks share. I feel like that’s just obviously true.

I watched it, I liked it (4 out of 5 exploding warp cores from me).

As for it “not being Star Trek” you have to take into account that this is an earlier time period than even the earliest Kirk that we’ve seen.

It is only natural that the ‘no-money, refined laws, squeeky clean’ Federation of Star Trek The Next Generation’ would be absent.

This is the Federation’s version of the Wild West period and I got what I expected, a raw, unfinished and more violent Federation.

This is the Federation’s version of the Wild West period and I got what I expected, a raw, unfinished and more violent Federation.

This sounds right up my alley! I’ve only ever seen a couple of episodes of deep space 9 so won’t be going into this with any expectations.

Why don’t you tell us what you really think

Whilst I didn’t hate it, there were certainly things that annoyed me.

Firstly, the Klingons. Why do they look different (yet again)? Is it simply to differentiate them from the Klingons of other eras/shows? This annoyed me. I’m not saying they didn’t look great… they did. But just changing them for the sake of it just to show you can seemed pointless. Yes, you can make the makeup look better (and this did look better) but you don’t need to change the design so drastically.

Subtitles. Nobody enjoys a bit of actual Klingon more than me, but this got tiring and old very, very quickly. Then at one point they chucked in a line in English making you think “Ah, now they’ll switch to English Hunt for Red October Style” but they didn’t. Not to mention, every single Klingon sounded like he was constipated. Suspend belief and let them speak English as though we’ve all got a Universal Translator like every other show did, and move the story along a bit.

Also the subtitles themselves (at least watching on our Apple TV) were very small and hard to read for my partner, even with his glasses on.

Sarek. Nice to see you mate, but you don’t look remotely like Mark Lenard and you don’t really sound much like him either. I know that isn’t a pre-requisite, but it may as well have been a new Vulcan character all together.

The old tired cliche of an officer defying orders and being put before the court/tribunal/whatever to be punished. Give us a break, we all know she ends up on Discovery. Save us the tormented journey.

I agree with Kionon above, it felt very BSG like in parts, particularly the music.

It looked amazing, but the writing could certainly use some work.

BTW, has anyone ever met a girl named Michael?

I pretty much agree with you. I came into Trek based on TOS reruns as a child in the late 80s. You’d think I’d have discovered TNG, as it was airing in prime time, but I didn’t know Star Trek until I got sick, stayed home from school, and one of the local stations ran a several hour block in the middle of the day. Later I found TNG, and then watched DS9 and VOY and ENT as they happened.

When I say it’s not “Star Trek” in an episodic manner, I mean that it has been made clear this will be like 10 part or 15 part “movie.” That episodes will be such that they could be binged and you’d not even notice. Trek episodes were always morality plays in a set number of acts, within about 45 minutes. True, there were the double episodes, and there were a couple of “arcish” episodes during the Xindi and Dominion Wars, but the norm was still self-contained episodes.

As for Michael, Michelle and Michaela are both feminised versions of the name that exist SOLELY to add gender difference where there shouldn’t be any. Angels have no sex/gender, and so Michael is rightfully a genderless name. Also many other names, most notably Kevin (as Kevin Michael is a normal Irish-whatever-ian combination), are now strictly male names, but historically were not. There’s no reason why there couldn’t be a girl named Michael except for our own preconceptions.

The point about the Klingons looking different (yet again) is something that I noticed too (and wondered about).

There are some non-canon stories about how the appearance of the Klingons changed and why and it would have been a gradual process and this is an earlier time so the process might still not have finalized.

The sub titles didn’t bother me but I was watching it on a 55 inch TV, I agree they’d be an issue on a small screen although I think the stilted nature of the actors real Klingon was more of a problem for me. That’s been discussed in forums and put down to the fact that none of the actors are actually native Klingon or even fluent Klingon speakers but it still doesn’t fix the issue.

The reason I gave 4 not 5 exploding warp cores was almost solely down to my issue with the stilted delivery of the Klingon dialog.

There are now people who have been teaching their children dual languages since a very young age and the 2nd language is Klingon.

However none of the actors are in any way fluent (and to the point where it’s painful to listen to).

I knew Klingon speakers (as a pre-teen, teen I spent some time hugely into Trek, and was a crew member of the IKV Melota). I wasn’t aware, but guess I shouldn’t have beens surprised, some folks taught their kids Klingon. I never learned any.

That was more than 20 years ago, though: 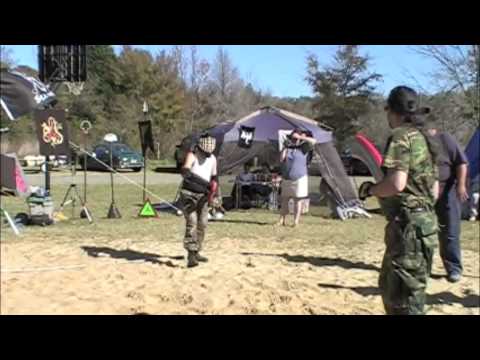 [quote=“Geoff3DMN, post:10, topic:3671”]
There are some non-canon stories about how the appearance of the Klingons changed and why and it would have been a gradual process and this is an earlier time so the process might still not have finalized.[/quote]

If that were the case it still doesn’t make sense. Enterprise was set before this and the Klingons in that looked just like TNG Klingons. Did they change to look like TOS Klingons and then change back in time for TNG?

Yes but the time line changed during Enterprise

We do not talk about it with outsiders. 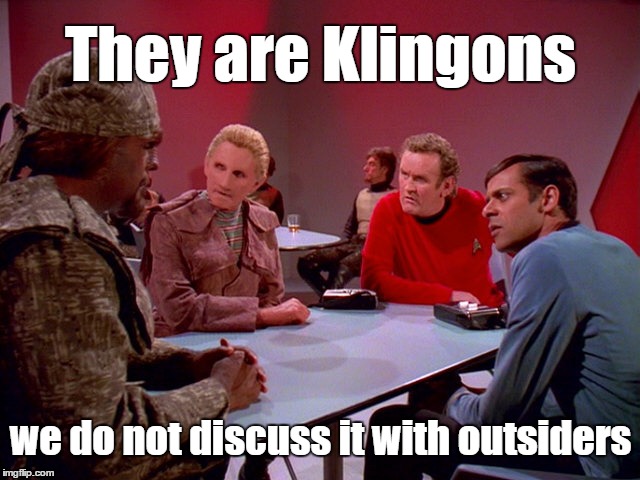 I liked it quite a lot. It felt like a return to the working-out-a-situation type trek I always liked more than the pure action spectacles (especially the mess that’s been the reboot movie series.

The Klingons now seem far more alien, moving away from the look of a grouchy human with a crab stuck on their head. There’s only so much you can do when you have humans acting of course, but I like the change. It feels like it’s not just a change for change’s sake, but a change to how the Klingons should have always been presented. That works OK in my head.

In the Star Trek universe all intelligent species are supposed to be humanoid. This is because an ancient race called The Preservers seeded the galaxy with humanoid DNA*. This was convenient as it allowed Winona Ryder to breed with Sareck, provided endless opportunities for James Tiberius Kirk to have sex with Alien chicks, and save $ on costume design.

I’ve not minded the first 2 episodes. Reminds me a bit about Babylon 5 for some reason.

Star Trek: Discovery felt to me like an attempt to return to the origins of Gene Roddenberry’s original ethos for his wagon-ride through the stars. (Well - more so to the origins of the Star Trek utopian mythos that evolved over time, rather than the original, simple attempt to re-skin the TV Western with a sci-fi theme…) skin on a popular Western show, rather than the mythical utopian future that Gene later envisioned…)

Setting the series between Enterprise and TOS was an interesting if obvious choice given the popularity of the modern blo¢kbu$ter movie reboot, opting for something recognisable to the unskilled rather than attempting to continue into the future of a franchise that has now essentially discarded the past 30 years of its own history. That said, hopefully they are not going to continue down that path of Michael-Bay-inspired dross. (I’m guessing btw that the new Klingon look was inspired by Abrams movies, though yes, Klingon costumes sure do like to change between franchises - or even just between seasons during TNG!)

I’ll admit that TOS is not my thing - enjoyed the movies as a kid, but never got into the original series, despite several attempts. (And it’s not a generation thing - I’ll sit through b&w Doctor Who without a problem…) As such, despite being well across TNG, DS9 and VOY, I was left scratching my head regarding some of the Klingon back story in Discovery’s opening 2-parter. I’m assuming that they are avoiding any major ret-cons, knowing that the existing fan-base would set phasers to kill, but that said, I think (like with WHO’s reboot) to some extent we just have to move forward and accept some changes if the creative forces feel they are necessary to develop a compelling story.

Overall however as noted, this story did feel like it was shooting for more than just explosion of the week. There was what felt like very obvious parallels with our planet’s own current calamities, though not to the point of being cumbersome. (The Twelfth Doctor’s Zygon two parter climax may have given us some amazing acting by Capaldi, but for me I watch sci-fi to get away from the real world, not live in it…) The biggest issue for me right now is getting used to seeing “Sasha” alive again (and not trying to munch on brains…).

The choice for their lead actor/character seems to me to be a brave one. (I mean - foremost - it’s a woman!! … … Kidding! Honest!) Sonequa Martin as noted has come from the Walking Dead ensemble, where (in my opinion) she was perfectly adequate but no scene-stealer. The other brave choice is creating a Star Trek story that is NOT centered (as far as we can thus far tell) around the most senior character - ie a Captain.

Ultimately - I’m intrigued to see how this pans out…